Reproduced from Volume XVI of the Yorkshire Archaeological Journal.

Unfortunately the Google Books scan of the photographs of the finds is of poor quality and partly corrupted.

EXCAVATION AT PULE HILL, NEAR MARSDEN,

On the Huddersfield and Manchester Road.

A report was made to the President of the Yorkshire Archaeological Society that five urns and a number of worked flints had been found on the top of Pule Hill, eight miles south-west from Huddersfield, on the road from that place to Manchester, and in consequence, in the autumn of 1899, a regular investigation was undertaken under the auspices of that Society. The position and aspect of this hill were sufficiently remarkable to confirm the likelihood that a burying-ground of some importance would be found there. A long sloping shoulder, edged with a remarkable millstone grit escarpment, rises to a point whence the ground falls sharply away on three sides. The contour lines of the 6in. ordnance map, No. cclix., S.E., show at a glance that Pule Hill stands boldly above the moors, which rise gradually to the watershed of the Pennine Range. Its summit, where the urns and flints were found, was perhaps once covered with peat, since used up for fuel; now it is composed of rough debris of rock, shattered by frost and disintegrated by storms of rain and wind.

In order to make a complete investigation of the site where urns and flints had been discovered, a trench was driven straight across the top from west to east, the ground then bared to the bed rock as far as the outcrop on the western and eastern and southern sides, and, as far as a line drawn east to west, about thirty yards to the north. 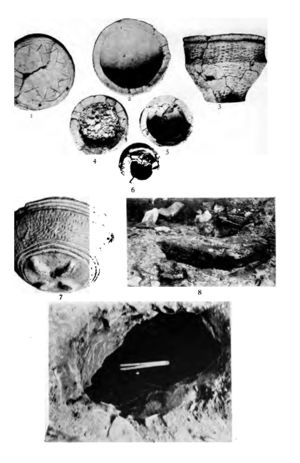 Here the rough soil varied from a depth of two feet to as many inches. There was no sign of a mound, but as the hill top had possibly been denuded of the peat which covered the crest of the ridge, there is no direct evidence against a mound. In three places were found distinct cavities (Figs. 8 and 9), — one cavity selected and photographed from the side (Fig. 8), and from above (Fig. 9), — driven into the rock to a depth of about eighteen inches, the dimensions of which were irregular owing to the shattered condition of the rock, but averaged three feet long by two feet wide; nor was it possible to detect a symmetry in the arrangement of the holes. At the time of excavation small portions of bone and charcoal and flint were found in the bottom of the cavities. The discoverer of the urns states that they were laid on their side at the places where the cavities were subsequently discovered. Note Greenwell's British Barrows, p. 9.

"Holes below the natural surface were frequently found within the area of a barrow, sometimes four or five in a barrow of various sizes, differing in shape, but generally circular, about 1½ feet in diameter and the same in depth. In the greater number of cases filled with the ordinary materials of which the mound itself is composed ; at other times containing pieces of animal, more rarely human, bones, potsherd, charcoal, &c."

Four of the Pule Hill urns were of the kind which have received the name of "food vessels," and contained bones and charcoal. In one case only was a flint found inside an urn ; these urns lay on their side, but as the discovery of the cavities was made at a subsequent time to the finding of the urns there is no exact evidence as to the manner in which they lay relatively.

Besides the four vessels mentioned above, an "incense cup" (Figs. 1 and 6), containing soil and calcined bones, was found. In this two little holes, 1½ inches apart, were pierced at the bottom corner, in such a position that air for the slow combustion of the contents would hardly enter the cup unless it were raised slightly from the ground.

Dimensions of the incense cup.

Lines lightly incised, zigzag on sides and base.
Circumferential at edges of top and base.

The dimensions of two of the "food vessels" are given below. Neither presents any striking particularity. In the case of one (Figs. 3 and 5), the two beads round the mouth are strongly marked, and have a very distinct groove between them —

The rim overhangs inside.

A number of slight indentations distributed fairly regularly over the whole surface.

Upon the sides of the other vessel (Fig. 4) are two slight lugs, opposite to one another, and 1¾ inches from the base.

This urn has been very much broken, but the lugs appear to have been perforated, and to have been pinched up from the body of the urn, and not superimposed, as in the urn described below.

The holes have broken out, and there would never have been strength in the lugs to resist the strain of a thong passed through them.

The rim overhangs inside

The most interesting and at the same time the best preserved of the “ food vessels ” is shown very clearly in the photograph (Figs. 2 and 7).

From the dimensions given below it will be seen that the width is greater in proportion to the height than is usual.

There remains one perforated lug, and a distinct indication, where there is a break in the ornamentation, that a second similar lug has been placed on the vessel.

At the time of the first discoveries, when the spade touched bones, the soil appeared to fall in as if a body had lain in the spot and become disintegrated. Many bones, again, were found inside the urns. They have been kindly examined by Professor Boyd Dawkins, F.S.A. He states that they contained calcined fragments of various parts of the human skeleton, such as skull, lower jaw, elbow, humerus, &c.

They have been so completely burned that there is no carbonised animal matter left in them. That they have been burnt is shown by the curiously warped and distorted forms, and from the manner in which they have been traversed by cracks. Among the bones submitted to Professor Boyd Dawkins, no trace of any animal could be detected, man excepted.

Photographs of the urns, the site, and the cavities mentioned above were taken, and are in the possession of the Librarian, who makes this report.

The urns are held by the finder, Mr. George Marsden. An endeavour will be made to have them kept eventually in a safe and accessible place.

The discovery was reported to the Society of Antiquaries, London, in 1897. See Proceedings, 1897, March 25; Second Series, vol. xvi., No. iv., page 325; but the urns were not produced and no photographs presented.

It is hoped that other discoveries may be made in the remarkable hills of the Pennine Range, judging from the similarity of the positions of this discovery and that near Todmorden, reported to the Society of Antiquaries, London, in 1898.

The thanks of the Society are due for facilities afforded by Sir P. Radcliffe, the owner of the estate, and Mr. Joseph Crowther, who rents the property.