Reproduced from Volume XVI of the Yorkshire Archaeological Journal.

Considering its marvellous position as a place of defence, it is surprising that the real history of Almondbury Castle Hill should (so far as I know) only begin in comparatively recent (that is) feudal times.

The late Dr. Walker, who wrote an interesting paper in the Yorkshire Archeological Journal on this history — based upon extant inquisitions and returns from temp. Edw. I to James I, incidentally remarks that "there is strong reason for believing that it has been a place of strength in Saxon, perhaps even in Celtic times," but I am unable to cite any authority for this belief as to Celtic occupation beyond the inference that may be drawn from the character and nature of the hill itself. The theory of its Saxon establishment is advocated by Camden, Watson — the historian of Halifax — (Archæologia, vol. i, p. 224), and others; whilst Dr. Whitaker (in the History of Leeds) asserts that this is unquestionable.

Dr. Walker gives no countenance to what must be called the heresy of Camden (col. 855 in edition of 1722) in fixing upon this place as the Roman Cambodunum (the station between Mancunium and Calcaria, in the Itinerary of Antonine). Still, the high authority of Camden seems to prevail in some quarters and with some writers of our own times, for I have lately seen in some archaeological book or journal an ascription of the name Cambodunum to the village or hill of Almondbury.

But Horsley, in his Britannia Romana (published in 1732), pronounces decidedly against the claims of Almondbury to be Cambodunum, and so long ago as February 17, 1766, a paper by Mr. Watson was read before the Society of Antiquaries, which pointed out the errors into which Camden had fallen, and in which he says that "the ground has nothing of the Roman taste about it; there have been no coins, altars, or other relics of that people found there, and what is more, no Roman military way goes near it."

He then gives a plan of the earthworks, and argues at length that the almost universally adopted rules of Roman castrametation are absolutely ignored here, though they might have been applied. He also adduces the distance from water as a conclusive proof against Roman occupation; and he gives us the tradition that the supply of water was brought by pipes from Lud-hill, i.e. Waterhill. He says:— "These reasons render it probable that Castle Hill in Almondbury was not a Roman but a Saxon fortification. Several arguments may be produced to show that it was thrown up as a barrier to secure the kingdom of Northumbria from the invasion of ... powerful neighbours."

These arguments he repeats in his History of Halifax, and then he goes on to discuss at great length the reasons for and against the location of Cambodunum at Slack.

The Yorkshire Archaeological and Topographical Society, over which I have the honour to preside, claims to have identified Slack as the site of Cambodunum as the result of extensive investigations and excavations (made some 29 years ago), and the very first paper in our Journal may be referred to for the details of those investigations. I may add that some additional evidence, tending to the same conclusions, has been derived from the direction of some Roman roads as laid down by the officers engaged in the Ordnance Survey. A paper by the Rev. Joseph Hunter (Archæologia, vol. xxxii, p. 16) may also profitably be studied, for though his conclusions did not lead him to adopt Slack as Cambodunum, he yet pronounced decidedly against Almondbury. His paper contains an admirable summary of the conflicting opinions advanced on the subject prior to 1846, but of course the excavations above-named had not then been made.

I hope, then, that I have said enough to convince you that Castle Hill never was a Roman station, but that it may very probably have been occupied by our Saxon forefathers. 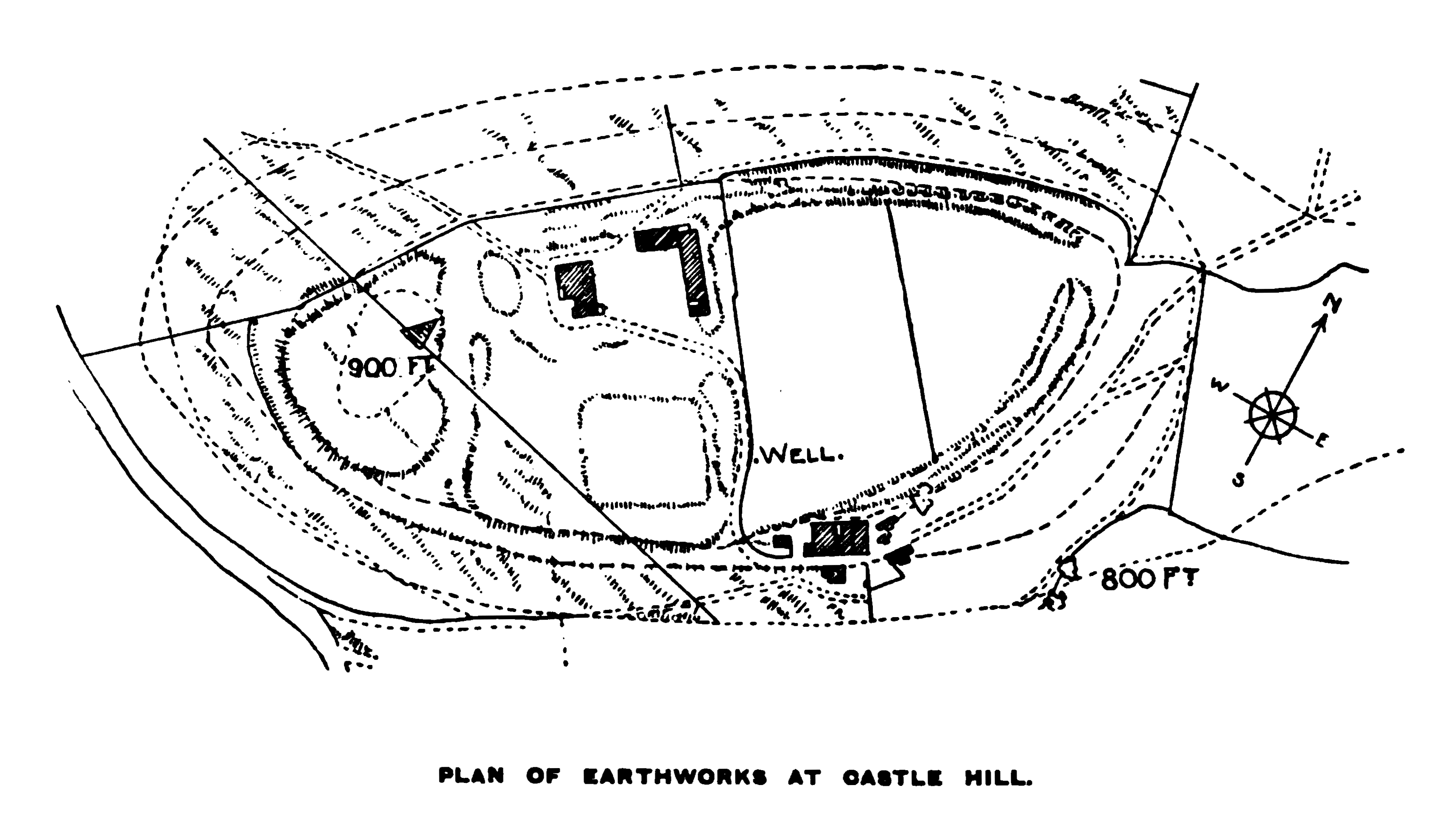 Let me now proceed to consider the existing remains, which, except as regards earthworks, are scanty enough. These earthworks are, however, magnificent, and the plan which is appended to this paper will give us an idea of them. In their present state I do not hesitate to attribute them to Norman times. We see to the East (N.E.) clearly defined the entrance into the first enclosure or outer bailey. A mound and deep trench separated this from the second enclosure, which in all probability would contain the domestic offices and be the part of the Castle where the life and business of the inhabitants and defenders would be mainly carried on. The approach or gateway from the East to this inner bailey is still plainly marked, and it has been utilised as the roadway to the hotel and other buildings on the hill. This enclosure again is divided from the westernmost and smallest enclosure by a trench of great depth and difficulty, and this western area must have been the site of the Lord's house, or Castle itself, and the last place of retreat and defence in case of attack, the precipitous sides of the hill being strengthened by a mound and a trench, and probably surmounted by a palisade. I do not believe that any stone-built keep or fortress was ever erected here, and the feudal home was in all probability a wooden house, with stone foundations and lower storey, relying for its protection on the trenches and palisades, and its almost impregnable position. Had the Castle been entirely of stone, some more massive remains of stonework would have been left to tell the tale, though it must be said that several worked stones were found in the remarkable well which was discovered on digging the foundations of the Victoria Tower; and still more recently some massive wall foundations have been laid bare.

We have seen, then, that this final point of retreat had from its only assailable side a triple line of defence, and it seems evident that a small body of resolute men might well hold the fort against a formidable array of assailants. The total area of the enclosure is about ten and a half acres.

A short account of the authentic history of the place may be added to the above description.

Almondbury was one of the manors conferred by the Conqueror upon Ilbert de Lacy, as a reward for his services in the subjugation of the Northumbrian kingdom. He began the Castle of Kirkby (now Pontefract), to be the head of the future Honor of Pontefract, and Almondbury eventually became incorporated in that Honor. The Castle of Almondbury is said to have been built by King Stephen in the early part of his reign (the property of the Lacy's having been forfeited in 1102). If this be so, the Castle was almost immediately regranted to Henry Lacy; but there seems to be no record of this Royal building, and it seems preferable to believe that the Lacy's, either before 1102 or soon after their restoration, erected this house. Ilbert the Second (grandson of the original grantee) espoused the cause of Stephen, and hence perhaps the opinion that the King built this Castle.

The manor continued to be a part of the Lacy Fee until and through the reign of Edward I, when it was the property of Henry de Lacy — Earl of Lincoln, the man from whom Lincoln's Inn was named — the greatest and best of this illustrious family. He died in 1310, and the estates, by virtue of the marriage of his only surviving daughter, became the possession of Thomas Plantagenet, Earl of Lancaster. After his rebellion they were confiscated, but were afterwards restored by special Act of Parliament, passing to John of Gaunt, Duke of Lancaster. Henry of Lancaster, ascending the throne in 1399, carried this manor as a member of the Honor of Pontefract and Duchy of Lancaster to the Crown. It remained Crown property till, in 1627, it was granted to the ancestors of the present distinguished owner, Sir J. W. Ramsden, Bart.

In the early part of the reign of Edward I we have returns to articles of enquiry made by the King's Commissioners 1273-4, which prefer charges against the Lord of Almondbury, Henry Lacy, Earl of Lincoln, for offences committed by his bailiff and officers; and in the first year of the next reign (Edw. II, 1307-27) we find in Dodsworth's MSS. a record which refers to the former Castle of Almondbury, which seems to prove that the Castle itself had been dismantled, though at least a prison or dungeon still existed.

We know from the Saxon Chronicle, sub anno 1137, that in the time of Stephen "every powerful man made his castle, and they filled the land full of castles. They cruelly oppressed the wretched men of the land with castle works; they filled them with devils and evil men, &c. &c."

Stow, however, tells us that the castles which had been builded to fill the rich and spoil the poor were, by the King's (Henry II) commandment and the counsel of his Chancellor (Becket), thrown down (circa 1155). Is it not possible that this stronghold may have been thus destroyed?

In the reign of Edward III we have a most interesting inquisition of Alraondbury: —

The two first of these display much of the tyranny and oppression which are the mark of feudal times, but the later ones shew how much the condition of the people had been improved, and we find that suit and service at the Court of the Lord, with rules as to grinding the tenant's corn at the Lord's mill, and the payment of double rent on the entrance into a tenancy have been substituted for the exacting servitudes of an earlier day. It is unnecessary in this short paper to enter into a comparison of these returns, but we may note that in the earliest of them this hill is spoken of as the hill where the Castle formerly stood, thus confirming the account of the early destruction of the Castle, which we derived from the return temp. Edw. II. The Grange (Hall Bower) and the Park (still so called) are also named in the returns. The Inquisition 1584 expressly states that the Castle, "which in antient time was the chief mansion house or scite of the said manor," has now "of long time since been utterly decayed."

For a fuller notice of the return to these inquisitions I would refer to a most interesting paper by Dr. Walker, F.S.A., Scot., in the second volume of the Yorkshire Archæological Journal.

I cannot help entertaining the hope that at some time a careful exploration of the contents of the hill may be made, and thus that future light may be thrown upon the history of a site which must ever be of intense interest to Yorkshire antiquaries. We have been told that some remains were found on digging the foundations for some building on the hill, but unfortunately no proper record of the discovery was made, and no following up of the clue was attempted. This of course refers to some much earlier building than the Tower, or even the Hotel. Subsequent discoveries have been mentioned above.

The following is a scan of an original article and is made available under the terms of fair use for research purposes.
[ open in new window ]