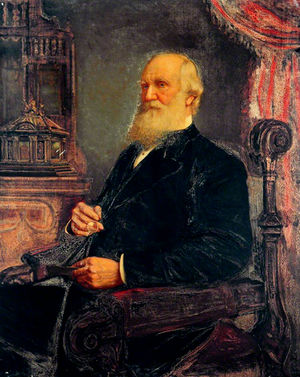 Alderman Wright Mellor was a member of the Huddersfield Corporation Town Council from its inception until November 1892.

He became a county magistrate in April 1863 and regularly attended the Highfield Independent Chapel.

In later life he spent time convalescing at seaside resorts and his last Council appearance was at the November 1891 meeting, after which his health went into decline and he was confined to bed.

He was born on 29 March 1817 in Salendine Nook, Lindley, the son of woollen manufacturer James Mellor and his wife Ruth (née Sanderson).

Eliza Ann died 16 April 1905, aged 80. At the time she was residing at Ebor Mount in Huddersfield.

Aldermen | Councillors | Justices of the Peace | Mayors of Huddersfield | Mellor (surname) | People
This page was last modified on 22 February 2020, at 18:18.