William Wallen was a London-born architect who established a practice in Huddersfield. 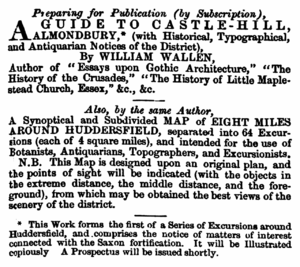 He was born in Stepney, London, the son of architect and surveyor John Wallen (1783-1865) and his first wife Maria (née Adams), and baptised on 26 April 1807 at St. Mary Matfelon Church, Whitechapel.

He married Frances Gill[1], daughter of Richard and Mary Gill of Barnsley, on 16 June 1830 at Carisbrooke on the Isle of Wight. The couple had one known child:

As an architect, he initially practised with his father at Spital Square, London, before the partnership was dissolved in February 1837. He then moved to Huddersfield where he was had practices on Manchester Road, West Parade and, by the early 1850s, 2 New North Road.

In 1848, he proposed the building of a tower on Castle Hill, "to serve as an observatory for astronomical and other purposes, and a landmark for the whole country", but this was rejected by the Ramsden Estate who felt that the site should not be "disturbed for a new erection of any sort or kind".[4] In August 1850, a correspondent wrote to the Huddersfield Chronicle suggesting that Wallen's design for the tower could serve as a base for a "colossal" statue of Sir Robert Peel.[5]

The objects proposed are the providing accommodation for private picnic parties and excursion parties and the erection of an Observatory, from which to view the surrounding scenery ; it being presumed that from the summit of the Tower the view of York Cathedral would be regained (now concealed by Whitley Woods), and that the mouth of the Humber and the German Ocean would be seen (as they lie due east) without much intervening hill. Castle Hill, Almondbury, can be see from the Vale of York, and as these two objects are recognised from the low Tower erected above Holmfirth within the last two years and to which the inhabitants of the surrounding districts resort.

Huddersfield being without any place of attraction to the visitor, it is hoped that the deficiency would be supplied, and that advantage would accrue to the village of Almondbury. 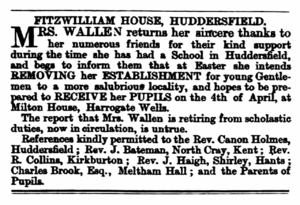 Frances Wallen ran a "preparatory boarding and day school for young gentleman" in connection with the Church of England[6] — this was initially based on New North Road before moving to "a more eligible residence" (named in later advertisements as Fitzwilliam House) on Fitzwilliam Street in 1855.[7] The school closed in 1864, when she relocated to Harrogate.[8] She continued to advertise in the Chronicle until 1870.

Although it was for a long time assumed Wallen died in the 1850s, recent research shows that he was admitted to the Bootham Lunatic Hospital in York (also known as the York Lunatic Asylum) in September 1853 and remained there until his death aged 81 on 1 May 1888.

The 1861 and 1881 Censuses for the institution contain entries for "W.W." (aged 53 and 74 respectively), described as being an architect born in London, with his condition noted as "lunatic" in the latter.