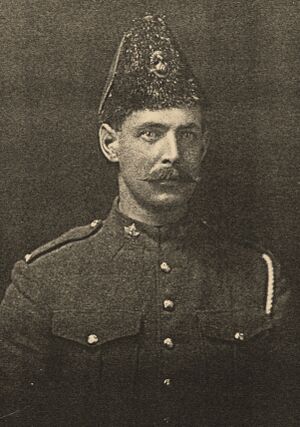 William James Holsey was born on 26 June 1876 at Saltburn-by-the-Sea, North Yorkshire, the son of gardener and farmer William Holsey.

Although the 1911 Census records his father residing at Law Farm, Southowram, Halifax, William James' probate record records his residence prior to enlisting as Shelley Woodhouse.

He sailed to Canada from Liverpool in March 1915 aboard the Scandinavian.

The slightly erroneous entry in J. Margaret Stansfield's book may be a mismatch for William James' younger half-brother Wilfred Holsey (1891-1916) who is the person named on the memorial at Emmanuel Church, Shelley. If so, it is uncertain what Wilfred's link to the Shelley area was.[1]

Canadian Infantry | Huddersfield and District Roll of Honour | People
This page was last modified on 20 November 2020, at 09:37.