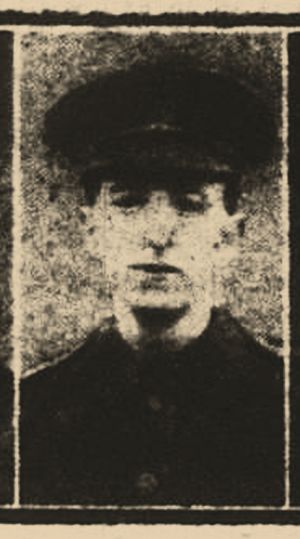 William Holroyd was born at Ainley Top in 1887. His father was John, a cloth finisher, and his wife Mary Ann, and the couple already had six daughter and five sons. At that time the family lived at Stone, that small community below Ainley Top in the Grimscar valley. At least one other child was lost in infancy.

Sadly, John Holroyd died in the late 1880s not long after William was born. He could only have been in his late 30s; William never knew his father. Fortunately, by this time at least three of the children were already out at work.

By 1891 Mary and the family had moved to Ainley Top. One boy, Albert aged 21, worked as a stonemason and Benjamin a year younger, was a clay miner, probably at the nearby quarry in Blackley. The three oldest girls worked in worsted mills, either down in Elland or across at Lindley.

The Holroyd family were still at Ainley Top in 1911, living at no. 14. By then there were eight adult children living at home with ages ranging from forty-one to twenty four. On the form, Mary records that five children had died by 1911, so this must include some who grew beyond infancy. The three rooms of no. 14 must have seemed very crowded even by standards of the time.

With eight adult wages coming into the home, the family must have felt quite well off. William was by this time working at Plover Mills as a weaver, while many of his brothers worked as labourers and one sister was a dressmaker.

William enlisted in the army at Halifax on 15 November 1915 joining the 3/4th Battalion the West Riding Regiment, the Duke of Wellington's, the regiment's training battalion.

At 5' 8", William was tall compared to most recruits, with a 34" chest. His physical development was described as "good". After training he was posted to the 2/4th Battalion on Salisbury Plain and was with the battalion when it landed in France on 9 January 1917.

The 2/4th Battalion as part of the 62nd (2nd West Riding) Division was involved in the Battle of Bullecourt in the Somme and William died on the first day of the battle. His body was never recovered and is remembered on the Arras memorial and locally at Blackley Baptist Church.

One sister, Bertha, married in the summer of 1918 and was living a few doors from the rest of the family on Ainley Top when Mary completed the official paperwork in 1919.

HOLROYD, WILLIAM. Private. No 202071. 2/4th Battalion Duke of Wellington's Regiment. Born Halifax. Son of the late John and Mary Ann Holroyd, 14 Ainley Top, Lindley, Huddersfield. Employed as a weaver at Plover Mills, Lindley. Killed in action at the Battle of Bullecourt, 3.5.1917, aged 32 years. Has no known grave. Commemorated ARRAS MEMORIAL TO THE MISSING.