William Edward Rimmer was a photographer. 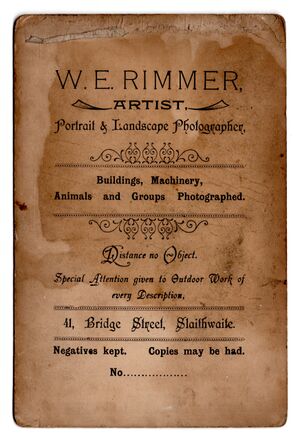 He was born in Liverpool, the son of commercial traveller William Rimmer, circa 1863 (according to later Census returns) but may have been circa 1860 (according to his marriage certificate).[1]

He married Emily Victoria Alexandria Blase, daughter of photographer John Walker Thomas Blase[2] and his wife Charlotte (née Gorsuch), on 29 December 1881, at St. Clement, Toxteth. Emily was born in Canada and was also a photographer.

The couple had seven known children:

By 1891, the family was residing at Royton, Lancashire, and William had become a photographer.

Within a few years, they had moved to 41 Bridge Street, Slaithwaite, where William was recorded as a "photographic artist" in the 1901 Census.

At the time of the 1911 Census, William was living with his married son Frederick who was the publican of the Great Western Inn on Manchester Road, Marsden. Emily was listed separately at Slaithwaite and also gave her profession as "photographer".

Emily Victoria Alexandria Rimmer died on 26 December 1925 at Huddersfield. William had predeceased her, but his date of death was not found during research.