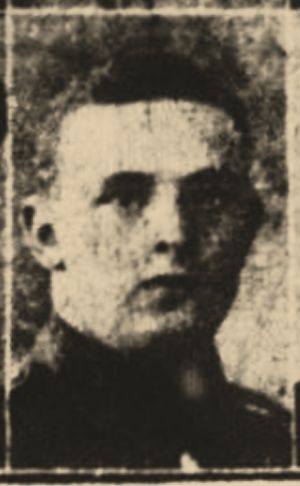 William was born in 1895, the son of Benjamin and Emily Brook (nee Dyson) who in 1901 lived along Lindley Moor Road. Ben was born in 1857 at Ainley Top, his wife four years later in Salendine Nook. In common with many of his neighbours he worked for the nearby brick works: he mined clay, others also dug clay or made bricks, others quarried stone. Their cottage boasted two rooms, in which they were raising three daughters and two sons. In addition, two children had died young.[1]

While many worked in quarrying or brickmaking, some of the others worked in the textile industry. Ada and Lena, the Brooks oldest daughters, were worsted spinners. The rest of their children were still at school

Three doors away lived Willie and Eliza Riley and their four children. Like Ben Brook, Willie worked for the brickworks. Norman Riley, aged three in 1901, died in 1917.

By 1911, Benjamin had improved his position somewhat: he was no longer a clay miner but had took over the tenancy of Carrs Farm with a house of four rooms in addition to a kitchen.

This was not a grand business and all five children had to go out to work and all had jobs in the textile industry. William was a machine tenterer or minder. By the time of his war service he was working for Messrs James Hawkyard of Upper Edge, Elland, along the Dewsbury Road, a good walk from Lindley Moor.

We do not know precisely when William enlisted but the fact that he began his service in the Duke of Wellington's but was transferred to the West Yorkshire Regiment suggests he did not volunteer early in the war but may have attested under the Derby Scheme and was sent where needed and not the local regiment he, like many other Huddersfield men, may have chosen.

Upon his death his parents received a war gratuity payment of only £5 and this may indicate only a limited period of service.

William was presumed killed on 21 March 1918 and as no body was identified he is remembered in France on the memorial to the missing at Arras. Locally, he is on the memorial at St. Philip's, Birchencliffe — his parish church — and on the Kew Hill Chapel memorial now kept at the East Street Church. He may also be the "W Brook" remembered on the Elland memorial at Hullenedge Park, Elland.[2]