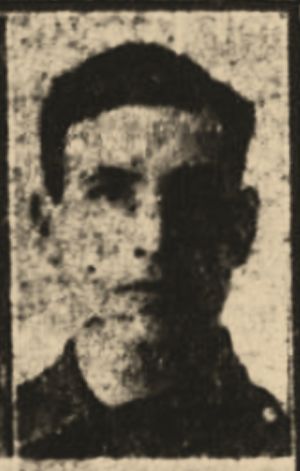 Wilfred Nutton is one of a small number of Lindley casualties to be buried in the Methodist church graveyard on East Street.

Wilfred was born on 7 June 1893 in Longwood and baptised in St. John's church, Golcar on 16 July. His father John, a brickmaker, was born in Longwood in 1859. Mother Nancy, two years younger than John, was born in Golcar.

John and Nancy had a total of seven children but two died young. Their house, 9 Kew Hill, as recorded in the 1911 census had 4 rooms. In 1901 John and Nancy, the five children aged between 15 and two, and Nancy's 75 year old mother, Elizabeth Noble, lived there. The sleeping arrangements cannot have been easy.

Just two households away lived John's widowed mother Elizabeth, who had been born in Haigh House Lane, just along from Kew Hill, in 1836. She had been living there in 1891 but John's father Sidney had died at the end of 1894. John's brother Henry, like him a brick labourer, still lived with their mother, as did their sister Mary Ellen. Successive generations of the Nuttons never moved far.

John and Henry may have worked at the brickworks in Blackley or that in Birchencliffe. His wages as a labourer cannot have been high. By 1901 the oldest daughter, Annie Louis, then aged 13, was working as a "cotton piecener". Ten years later three more of the children were at work and Annie, like the others, now worked in the woollen industry. Alfred, aged 20, was a piecer, Wilfred, then aged 17, was a warper and Harold, only 15, was a "tenter". Arthur Lewis, at 12 years old was still at school, presumably walking either to Lindley or to Outlane, both considerable distances.

Wilfred was 20 years old when the war broke out and may have joined as early as late 1915 like many Lindley men. The 8th Battalion, the Duke of Wellington's was formed in Halifax in August 1914 and served in Gallipoli from August 1915. It was transferred to France in July 1916.

Wilfred was awarded no 1914/15 Star so did not enter the army early enough to go to France until after the introduction of conscription in early 1916. It seems likely, therefore, that Wilfred waited to be conscripted and was called up during 1916 and may have been sent to the battalion as a replacement soon after it arrived in France.

The 8th Battalion was disbanded in February 1918, presumably after accumulated losses. The fact that Wilfred is listed as being in the 8th when he died might suggest he served in no other unit after early 1918. This could mean he was in hospital from that date until his death.

He died in the 1st Birmingham War Hospital at Rednal nine miles south-west of the city, on 29 November 1918, eighteen days after the end of hostilities. He may have died in the influenza outbreak that was then affecting the country, but it seems more likely he died of wounds.

He is buried in the Methodist churchyard on East Street, the grave marked by a family stone. His mother died in 1933 and his father a few years later. Both are buried with Wilfred, who is also remembered on the Kew Hill Chapel memorial kept at East Street.