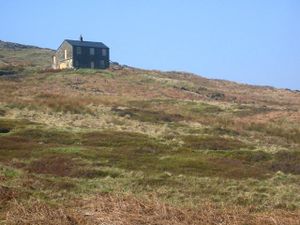 West Nab Cottage is a former gamekeepers house, situated on the flanks of West Nab above Meltham in an area of moorland known as "The Scope".

The area to the south of the cottage was drift-mined for coal in the 1800s and is marked a the "West Nab Coal Pit" on the 1854 map of the area.

Two water springs rise to the west of the property and were referenced in the Huddersfield Waterworks Act discussed in the 1866 Session of Parliament.

The date the cottage was built is currently unknown, although it does appear on the 1854 map and pre-dates the 1841 Census.

The 1841 Census lists 40-year-old James Haigh and his family residing at West Nab Cottage. His occupation is given as "coal agent". The next entry on the Census is for 40-year-old coal miner William Haigh (possibly James' brother or cousin), residing at "Grange Ash" — likely this is Grains Ash, situated on Brow Grains Road.

In 1851, Haigh is listed as a "gamekeeper" on the Census. The occupation "hurryer in coal pit" is given for all his four sons, meaning they were employed to transport the freshly-mined coal from the pit.[1] 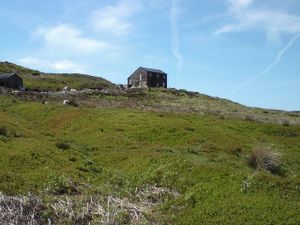 By 1861, their sons had moved out of the cottage and Haigh's occupation is "farmer and gamekeeper", although the youngest son, coal miner Charles, is listed separately living nearby at the curiously named "New Orleans" with his wife, Mary Ann — this was a farmstead situated south-west of the cottage.[2]

The 1871 Census lists 76-year-old James Haigh as a gamekeeper and son Charles is again listed at West Nab Cottage, together with his two young children. Charles is named as a "stone delver", implying the coal seams had now been emptied and abandoned.

The 1881 Census lists gamekeeper Thomas Lewis residing at West Nab Cottage, along with his wife Elizabeth and his 5-year-old sister Edith. He was born around 1860 in Gawsworth, Cheshire, the son of farmer George and Hannah Lewis. Thomas and Elizabeth had a baby son named Tom, born in early December 1881, but he died on December 28 and was buried on December 31 at St. Bartholomew, Meltham.[3]

The cottage seems to have been abandoned in the 1880s, as both the 1891 and 1901 Censuses list the cottage as being unoccupied. The property does not appear at all on the 1911 Census.

On the evening of Friday 6 April 1945, a USAAF B-17G Flying Fortress crashed on the moors above the cottage in bad weather, seriously injuring two of the crew members. A rescue party eventually brought the two men down to ambulances which were waiting at West Nab Cottage.

Buildings
This page was last modified on 16 August 2018 and has been edited by Dave Pattern.