The reservoir is part of a descending chain of four reservoirs in the Wessenden Valley:

...having a Fall of upwards of Sxity Feet on a never-failing Stream of Water, with the Advantages arising from a further Supply, which the Owners have the Privilege of taking from the Wessenden Reservoir.

The Wessenden Reservoir Act of 1836 "for embanking a reservoir in the valley of Wessenden, in the Township of Marsden, and parish of Almondbury, in the West Riding of the county of York, for preventing injury by floods to lands and property adjoining the River Colne and Wessenden Brook, and for other purposes" was passed by Parliament after a third reading on Tuesday 14 June 1836[2] and given Royal Assent on 4 July.[3] 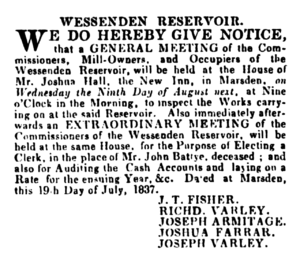 Construction of the reservoir was still ongoing during the summer of 1837.

Following the disastrous collapse of the Bilberry Reservoir embankment in February 1852, the Commissioners undertook and examination of the reservoir and passed the following resolution:[5]

That the committee having carefully inspected the Wessenden Reservoir, are much gratified to have it in their power to communicate their entire satisfaction with it, and can confidently assure the many millowners and mill-occupiers connected with the said reservoir, and also the many inhabitants living within the influence of its powerful waters, that they consider the work so perfectly safe and firm, that both life and property may be considered safe and secure.

Following the rains which caused the Holmfirth flood, a drought led to Wessenden Reservoir running dry in May 1852. The Huddersfield Chronicle noted that "on previous occasions when the reservoir has been drawn off, there have been large lakes of fish, but this time not a single trout was either caught or seen."[6] The reservoir also ran dry during the droughts of 1864 and 1865.[7]

In 1865, the Huddersfield Improvement Commissioners examined a number of locations for potential drinking water reservoirs, including sites at Blackmoorfoot and Deer Hill. Amongst the proposals was to build a long catchwater which took in Bubbling Springs on Lingards Moor and Hind Hill and Great Dyke Springs in the Wessenden Valley — as this would deprive Wessenden Reservoir, the proposal also included paying to raise the embankment of the reservoir so that the Wessenden Commissioners could "impound an additional quantity of water".[8]

The Huddersfield Waterworks Act 1869 gave the newly formed Huddersfield Corporation the power to "purchase the undertaking of any company or body established to supply water in the borough". Under the subsequent Waterworks Act 1871, the Corporation intended to purchase Wessenden Reservoir (reportedly for £10,000) and enlarge it, and also to build a two new reservoirs (to be known as Blakeley Reservoir and Booth Reservoir) further down the valley. However, these plans were largely abandoned.

The Huddersfield Waterworks and Improvement Act 1876 saw the Corporation being construction of a new reservoir above Wessenden Reservoir (known as Wessenden Head Reservoir) and also gave them the powers to channel excess water from the existing reservoir across to the new Blackmoorfoot Reservoir.

The Huddersfield Corporation Waterworks Act 1890 saw the replacement of the abandoned Booth Reservoir scheme with Butterley Reservoir and the payment of £50,000 to the Wessenden Commissioners for the purchase of Wessenden Reservoir.