The route from Oldham to the county boundary at Austerlands (Saddleworth) was turnpiked after the granting of an Act in 1735. It was then joined circa 1760 by the Wakefield and Austerlands Turnpike, which passed through Huddersfield.

An ingroſſed Bill for repairing and widening the Road from Wakefield, through the Townſhips of Horbury, Netherton, Overton, Lepton, Almondbury, Huddersfield, Marſden, and Saddleworth, to Auſterlands, in the Weſt Riding of the County of York; was read for the Third time.
— Journals of the House of Commons, 27 March 1759 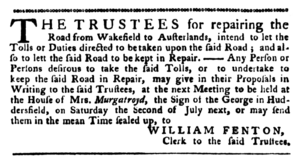 The bulk of the first turnpike from Huddersfield to Austerlands followed the route of existing tracks and roads[1], with the Act empowering the Turnpike Trust to lay down a more hard-wearing surface and to widen the route were necessary. Civil engineer John Metcalf — better known as Blind Jack of Knaresborough or Blind Jack Metcalf — undertook the construction of the road, including the laying of a stable surface across half a mile of boggy land to the west of Thieves Bridge near Marsden.

A subsequent Act was granted in 1777 which saw improvements to the route:

This latter section was constructed first, again by John Metcalf, with the other sections completed circa 1815, by which time the Turnpike Trust had begun drawing up plans for further changes.

A third Act granted in 1820 saw the building of the current route, with the following major changes:

In 1840, the Parliamentary Commissioners for Inquiring into the State of the Roads in England and Wales reported the following details of the road:

The Act expired on 1 November 1882 and the Turnpike Trust was wound up.

The tollhouses at Milnsbridge[2] and at Marsden were sold at auction on 30 November:[3]

LOT 1. All that Valuable FREEHOLD GOTHIC BUILDING, situate at Spring Mill, Milnsbridge, and recently used as a Tollhouse, with the Outbuildings adjoining thereto. The House contains living room, bedroom, kitchen, and coal place on the ground floor, with outbuildings in enclosed yard. The Building is substantially erected, in good repair, and situated in a neighbourhood where tenants can be readily obtained.

The toll points that lay within the Parishes of Almondbury, Huddersfield and Kirkheaton from west to east are recorded on the 1854 O.S. map as follows.

An earlier toll house survives on Rowley Lane suggesting that the original turnpike route meandered through Lepton but was later replaced with a more direct new road (Wakefield Road).

The milestones that lay within the Parishes of Almondbury, Huddersfield and Kirkheaton from west to east are recorded on the 1854 O.S. map as follows.[4]

The western section between Austerlands and Huddersfield is shown below, based on O.S. maps and the description contained in Huddersfield Highways Down the Ages (1949):

The eastern section between Huddersfield and Wakefield is shown below, based roughly on the 1854 O.S. maps of the route.

The existence of a toll house on Rowley Lane, Lepton, shows that the original turnpike took a more meandering route from Huddersfield. Jefferys' Map of Yorkshire (1771) suggests that the original route was: Huddersfield, Moldgreen, Almondbury Bank to Almondbury, Fenay Lane to Fenay Bridge, Highgate Lane to Lepton, then onwards to Horbury and Wakefield. It is believed that this route was replaced with the construction of the new Wakefield Road circa 1777.