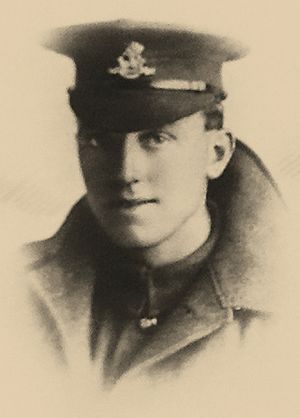 John Taylor and his wife Elizabeth Alice lived at Town End, Golcar in 1891, with their three sons: Arthur aged 12, Norris, aged 9 and Percy who was only four. John was a weaver and his family had lived in Golcar for at least two generations.

A daughter, Elizabeth, was born in 1892 and Vincent in 1895. Sadly, it seems likely that Vincent's mother died giving birth to him since she was buried at the Golcar parish church on 11 July that year.

Two years later in the summer of 1897, John had married again: Clara was three years younger than him and born in Holmfirth. By 1901 the family were living on Scarboro Terrace, Golcar and the oldest children were at work: Arthur a weaver, Norris a piecer and Percy at 14 years old, a clerk in a mill.

By 1911 they had moved to 121 Halifax Road, Birchencliffe, presumably for reasons of work. The house was owned by the Rev. R.C. Wilford, the former vicar of St. Philip's who by then lived in Garforth, Leeds, and who owned a number of properties in the Birchencliffe area. By this time Arthur, Norris and Percy had moved out, probably to marry and set up their own households. Elizabeth, at 19 years of age, was a warper, and 16 year-old Vincent was, like Percy, a clerk, working in a brewery, quite possibly at Netherwoods, Birchencliffe.

The house was spacious by the standards of the day: the family had five rooms so it seems likely that it either had three bedrooms or a kitchen and two rooms downstairs. They were far less crowded together than most Lindley residents, principally because there were only four of them.

Vincent must have attended St. Stephen's church because he was a member of the Young Men's Bible Class.

While we cannot be precise about when Vincent joined the army it is certain that he never served in 1914 or 1915. It seems likely that like many others he waited to be conscripted which would have meant some time after early 1916. The 8th Battalion arrived in France in July 1916 after serving in Turkey. Wilfred may have joined the battalion as a replacement at about that time or soon after and seems to have quickly been promoted Lance Corporal.

Vincent died of wounds at No. 4 Casualty Clearing Station on 19 January 1917 in the Somme area where the Battalion had served since it arrived in France.

He is remembered at St. Stephen's and on the memorial in St. Philip's, Birchencliffe, not far from where he lived.

8th Battalion, Duke of Wellington's Regiment | Huddersfield and District Roll of Honour | Lindley Roll of Honour | People | Taylor (surname)
This page was last modified on 17 May 2020, at 11:22.