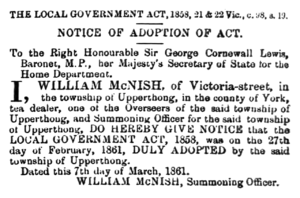 Upperthong Local Board was the local authority body primarily responsible for issues relating to public health in the township of Upperthong and was formed on 27 February 1861 with an initial membership of 12.

A total of 15 names were put forward as nominations for the local board in June 1861, but 3 withdrew, meaning that the remaining 12 were duly elected without the need for an election:[1]