The United States Army Air Forces B-17G-65 Flying Fortress number 43-37667, nicknamed "Barbara Jane", was an aircraft in the 709 Bombardment Squadron which crashed on Meltham Moor on 6 April 1945 during a routine maintenance flight, seriously injuring two of the crew.

The squadron, which was part of 447 Bombardment Group, was stationed at Rattlesden[1], near Stowmarket, Suffolk.

On Friday 6 April 1945, "Barbara Jane" had been fitted with two new engines which required running in with a test flight. The plane's regular crew members were unavailable and pilot Winston "Winnie" Johnson volunteered his crew.

Due to the nature of the flight, the gunners and bombmardier (2nd Lieutenant George Kinder) were not required, and the following crew took off at 5:10pm:

As the plan was to fly locally in a wide circle, Vukelic was not required to plot a route or to keep an accurate track of their position. Schnug's role was to monitor the performance of the new engines.

At some point during the test flight, one of the crew suggested they could give the engines a proper test by using the remaining flight-time to go due north-west to Manchester and back. As this was a deviation from the agreed test flight, it seems they did not contact their base to make them aware of their new route.

By the time they bomber was approaching the Pennines, darkness was falling and the weather had began to close in, severely reducing visibility. It seems at this point they were unsure of their whereabouts and a decision was taken to abandon carrying on to Manchester. Instead of climbing above the clouds to get a radio fix on their location, Johnson elected to take the plane into a gradual spiral descent in the hope they could spot landmarks that would allow Vukelic to locate their position and then plot a course home.

According to a newspaper report published in 1958, villagers in Meltham were able to hear the plane circling and some feared that a stray German bomber was in the skies above the town.[4] 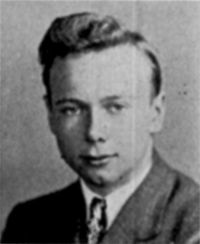 With Vukelic struggling to see anything out of the plexiglass nose cone at the front of the aircraft, Johnson passed the controls to co-pilot Parks and joined the navigator.[5]

Still unable to see anything through the low clouds and rain, Johnson then told Parks to gain some height. As the aircraft slowly nosed upwards, it suddenly broke through the clouds and the crew saw that they were only a few yards above rapidly rising moorland. Before Parks could react, the bottom of the bomber hit Meltham Moor and the aircraft, which had been travelling at over 100 miles per hour, began skidding forwards whilst breaking apart.

After a short distance, one of the wings dug into the soft ground and the aircraft was brought to a sudden halt, propelling Johnson and Vukelic through the plexiglass of the nose cone and out onto the moorland. The other three crew members (who were strapped into their seats) received only minor injuries and were able to haul their badly injured colleagues onto two inflatable dinghies and drag them well away from the burning wreckage.

Parks left to get help, walking northwards down off the moors — following a stream — until he spotted the lights of a cottage near Brow Grains, which belonged to the Huddersfield Corporation Waterworks and was the residence of employee Herbert Tasker.[6] The door was answered by Tasker's daughter-in-law, who then telephoned the Conservative Club in Meltham where Mr. Tasker and his son were drinking. Tasker contacted the National Fire Service (NFS) and began organising a rescue party.[7]

The first group to arrive at the crash site were members of the NFS, who brought Schnug and Woodbeck back to Meltham. One of the NFS members was given a flare gun and waited with the more seriously injured pilot and navigator for the arrival of stretchers.

The group with the stretchers had met at Tasker's house and then set off, accompanied by Dr. Robert Gellatly[8], but were unable to locate the crash site. After nearly an hour of stumbling across the desolate moors in worsening weather, they had to return back to the cottage as the doctor (who was in his early seventies) was too exhausted to continue.[9]

Concerned that Vukelic and Johnson would die of exposure on the moors, the rescue party mounted one more attempt, this time taking Mr. Tasker's dog with them. About an hour and half later, they came across debris from the crash and began calling out. A flare then lit up the area — to their frustration, the NFS man had apparently decided to wait until he could hear the rescuers before firing his flare gun.

Over hours after crashing, the two most injured men were finally carried down off the moorland to waiting ambulances at West Nab Cottage.[10] Both Vukelic and Johnson had broken backs and reportedly spent the rest of their lives in wheelchairs. Winston Johnson died in 1961, from complications arising from his injuries, and it is believed Walter Vukelic passed away in 2008 in New York, aged 86.

In the days after the crash, the USAAF recovered the aircraft's Norden bombsight[11] — at that point, still classified as "top secret" — and the larger parts of the wreck were broken up and partly buried.

Over 70 years later, parts of the wreckage can still be located on Meltham Moor.[12]

Crash sites
This page was last modified on 10 June 2020 and has been edited by Dave Pattern.