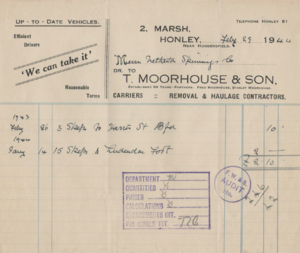 An invoice from July 1944 named the then partners as Fred and Stanley Moorhouse.[2] The firm advertised "efficient drivers" and "reasonable terms", with a motto of "we can take it".

The firm placed the following notice in the "Lost and Found" section of the Yorkshire Post (14/May/1948):

As of 2016, the company is run by the founder's great grandchildren.

Carriers and haulage companies | Companies
This page was last modified on 11 August 2016 and has been edited by Dave Pattern.