He enlisted in Holmfirth in 1909 and joined the 2nd Battalion (Royal Fusiliers) Durham Light Infantry. A character reference was provided by his employer, cab proprietor Walter Haigh of Station Road, Holmfirth:[1]

This his to certify that I have known Thomas Bartley for a number of years and he as been in my employ for 12 months. I always found him honest and straightforward. Also a total abstainer from intoxacating drinks. 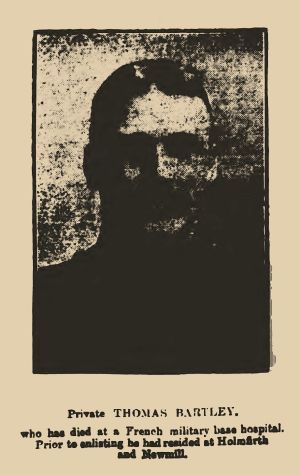 His death was reported in the Huddersfield Daily Examiner on 2 November:

Mr. George Fretwell, of 3, Back Lane, Holmfirth, has been officially informed by the military authorities at York that No. 10,879, Private Thomas Bartley, 2nd Battalion Durham Light Infantry, died at the French Military Hospital, at St. Omer, on October 17th, and expressing the sympathy and regret of the Army Council at his loss. There is an enclosure: "The King commands me to assure you of the true sympathy of His Majesty and the Queen in your sorry — Kitchener.

Private Bartley, who had no near relatives, had made his home with Mr. and Mrs. Fretwell, at Holmfirth, for many years. He was formerly a cab driver for Mr. Walter Haigh, of Holmfirth, and enlisted about five years ago, and prior to the war saw service in India. He had frequently written to Mr. and Mrs. Fretwell, who were much grieved on Saturday to receive the bad news.

Durham Light Infantry | Huddersfield and District Roll of Honour | People
This page was last modified on 17 May 2020, at 11:21.