This is one of the seven townships comprised in the graveship of Holme, and forms its eastern boundary; but it did not, like the rest of the graveship, form a part of the ancient chapelry of Holmfirth.

This township has several lofty hills, which are intersected by narrow valleys and deep ravines. The river Dearne takes its rise here, at a short distance to the east of the Pike-law Observatory.

Besides an ancient village of the same name, it contains several hamlets, of which Newmill is much the largest: and now a rapidly increasing centre of population and manufactures.

About half a mile to the east of Newmill is Fulstone Hall. The modern aspect of this place affords no indications of an ancient “Hall.” It is, however, certain that in the fifteenth century it was so designated ; but the “old hall” was taken down about seventy years ago.

In the reign of Henry VII. it was the property of William Morehouse, who, in 1490, was a party in a dispute respecting the right of his wife and family to kneel, &c., in a certain stall in the Parish Church of Burton. He was descended from Roger del Morehouse, who, in the reign of Richard II., [1398,] farmed the soke mills of the graveship of Holme. This William was succeeded by a son John, living here in 20 Henry VIII., [1528] : he died in the reign of Philip and Mary, and was succeeded by a son Thomas, living in 1574, who had a son William, residing here in 1607, in which year he appeared before a jury at Holmfirth Chapel [Church], appointed to enquire into the nature of the evidences and the tenure of the lands within this graveship ; when he shewed by his evidences that he held seventy-three acres of copyhold lands, by estimation, at Fulstone Hall, besides “seven selions lying in the new croft.” He held also five acres and a half of land by deed from Sir Thomas Gargrave, Knight, being a part of a parcel of lands granted by Queen Elizabeth to the Earl of Leicester.

At what period the estate passed from the Morehouses I have not seen. It was purchased in the latter part of the last century by the ancestor of the present proprietor, John Frederic Winterbottom, Esq., of Eastwood Heys, Berkshire.

Occupies a bold and prominent ridge on the eastern acclivity above Newmill, whence the ascent is very steep, but at the top it opens out into a wide and spacious flat, stretching out for a considerable distance, with a gentle descent towards the village of Fulstone, and possesses a south-easterly aspect. This estate comprises a number of farms of highly productive land ; pleasingly wooded and belted with plantations.

The name which is here given, according to modern orthography, has been somewhat changed within the last three-quarters of a century : as it was formerly designated “Stackwood” Hill. About eighty years ago the late Mr. Newton, — when it passed into his possession, — supposing Stack to be a corruption of Stag, changed it to its present name.

The house is situated on the verge of the hill, and although of ancient foundation, has been repeatedly altered and modernized. It is surrounded by a number of yew trees, some of a considerable size : an evident indication of its having been from a remote period the residence of a family of respectability. Thus we find that at an early period it gave the surname to a family who resided here doubtless for some length of time — the De Stakwoods. At what period they left the place is uncertain, and who were their immediate successors is equally unknown.

In 1490 I find John Stakwood then living in the district, but whether of this place does not appear. In that year he was one of the churchwardens, or as then designated, kirkgraves, for the Church of Burton. In the 12 Henry VIII., [1520,] I find Ellen Stakwood, then in her widowhood (the document from which I quote does not state her residence), leased in that year a messuage and lands at Holmehouse, in Fulstone, to John Tynker, but reserved the annual rent to John Kay. This is the last mention I have found of the name. It is probable she was the widow of John Stakwood, already named ; and at her demise it would seem the Stakwoods became extinct, as there is no mention of the name in the parish register, which commences within twenty-five years after that period.

The exact period when the Stagwood Hill estate passed to the Newtons, I have not been able to ascertain. They were residing here at the close of Elizabeth’s reign. In 1607, William Newton, then of Stagwood Hill, appeared at the inquisition in that year, and produced his evidences concerning his copyhold lands in the graveship, wherein he furnished the boundary of his lands, together with the annual rents due to the Chief Lord the King.

In the reign of Charles I. there was a William Newton of this place. He was probably the son of the aforesaid William. In the protectorate he had a law suit with Captain Richard Horsfall, Lord of the Manor of Thurstonland, respecting a right of stray and pasturage for his cattle, &c., upon the adjacent commons and waste lands in that lordship, which was confirmed to him by a decree from “the Upper Bench at Westminster.” He died in 1673, and was succeeded by his son and heir, John Newton, who was interred at Kirkburton in 1704, and left two surviving sons — John, who succeeded him at Stagwood Hill ; and Joshua, to whom he devised lands, &c., at Fulstone, Newmill, and Thurstonland.

John Newton, the elder son, baptised 23rd August, 1663, married Mary Beaumont, of the parish of Almonbury, in 1684. She died in 1689, leaving issue an only son, William, born in that year. He married to his second wife Mary, the daughter and co-heiress of Joshua Wilson, of Thongsbridge, and widow of William Wordsworth, of Sofley, in the parish of Penistone. He died in 1736, and was succeeded by his only son, William, who had married ___ daughter of William Wordsworth, of Sofley (and the daughter of his stepmother), by whom he had issue, first, Joshua Newton, who died unmarried in 1762 ; Lydia, married to Benjamin Empson, of Groole Hall; and John Newton, of Thongsbridge, who, by the death of his elder brother, became heir to the Stagwood Hill estate. He married Hannah ___ , who died in 1759, leaving no surviving issue. He married, secondly, ___ Woodhead, of Hullen-edge, and had issue two daughters — Lydia and Elizabeth. He was engaged in commerce, and by unsuccessful speculations, and a general mismanagement of his affairs, he became a bankrupt, and his estates were ultimately offered for sale, when the Stagwood Hill estate was purchased by William Newton, the grandson of Joshua Newton, the younger son of the first John Newton in this pedigree.

Mr. Newton by his success in business was thus ultimately enabled to become the purchaser of the ancestral estate, which he considerably enlarged by subsequent purchases, and which he greatly improved by judicious planting.

His general business habits led him to take an active part in whatever was calculated to promote the prosperity of the district, and in all matters of public interest, whether political, civil, or ecclesiastical. In the midst of his varied occupations he had been a considerable reader, and possessing an excellent memory, his store of knowledge was not inconsiderable. His perception of character was remarkable. Notwithstanding his numerous engagements, he was a keen sportsman, and retained a lively interest in active sports long after advancing age precluded his further participating in them.

To those who knew him only in advanced life, and saw him in his own house, the remembrance of him did not soon pass away. He was usually cheerful, often facetious in conversation and racy in his remarks : fond of relating his adventures and recounting his reminiscences.

The interior of his house, which was simple and unpretending, exhibited the characteristic tone of his mind. The entrance hall, which was of moderate size, was fitted up with old-fashioned furniture, not so much of a choice or antique character as indicating its descent from “sire to son.” The walls were hung with guns in their racks of various kinds, both of early and modern invention ; with pistols, swords, halberts, crossbows, and various other weapons and instruments. These, however, were not exhibited for show (for he was no lover of ostentation), but that he might see them from time to time, so that by his supervision they might receive proper care and attention. In this room he usually sat in his declining years, with a number of dogs at his feet like a true sportsman of “olden time.” He died on the 24th September, 1834, aged 90 years.

He was succeeded by his son and heir, Isaac Parker Newton, who survived his father only a few weeks; but who left issue, of whom Mr. Arthur Blencow Newton, of Stagwood Hill, is now the only male representative.

Is situated about three-quarters of a mile from Newmill. It is a small house, of respectable appearance, and was erected about 1740 by Mr. John Kaye, the only son of Mr. Jonas Kaye, of Milshaw Hall, in the township of Hepworth, who disliking the situation of the ancient mansion at Milshaw, as being both bleak and difficult of access, abandoned it and took up his residence at this place, where he died in 1745.[1]

A considerable part of the Butterley estate was purchased about twenty years ago, by the late Mr. Samuel Sandford, who ultimately made the hall his residence. He had by industry and frugality acquired a very competent property. He had an only child, Mr. Jonathan Sandford, who was also successful in business ; but melancholy to relate, was, with his family, drowned in the Holmfirth catastrophe of 1851. 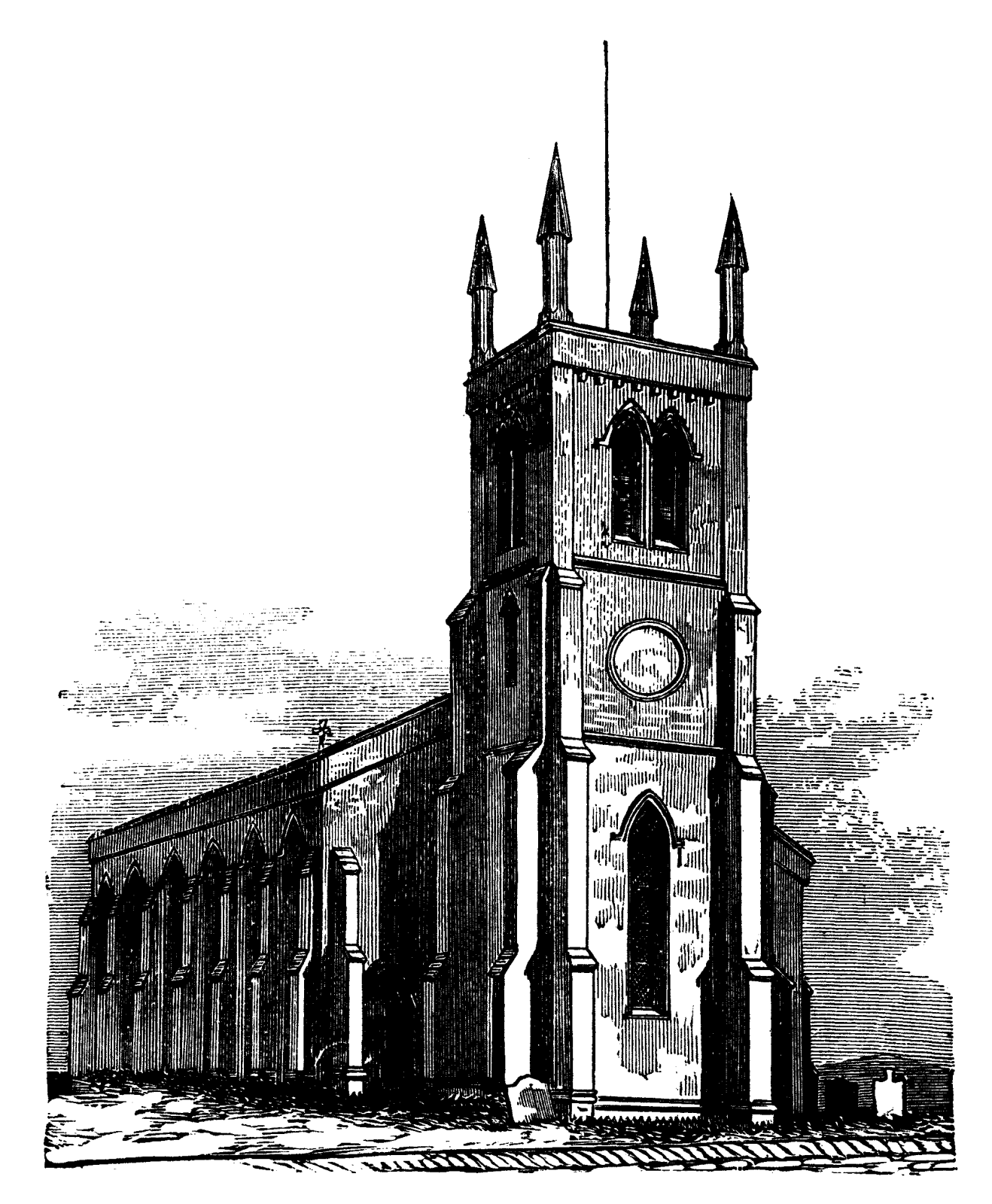 In 1829 a church was erected here, under the Million Act, for the accommodation of the increasing population of the district. The site being given by the late Mr. Newton, of Stagwood Hill.

It is a large and very substantial Gothic structure, with a tower. It was erected at the cost of £3,600, and is in the patronage of the Vicar of Kirkburton.

Although situated at the foot of three considerable hills, this church stands on a bold but picturesque eminence, and is seen from a considerable distance.

Near to the church is a large schoolroom, built in 1838, and a house for the teacher ; also used for the purposes of a Sunday school, in connexion with the church.

This school was founded in 1694, at the joint expense of Mrs. Rodes, of Flockton, John Newton, of Stagwood Hill, and George Morehouse, of Stoney Bank, for the benefit of the inhabitants of the townships of Fulstone and Wooldale.

The schoolroom, which was rebuilt in 1838 by voluntary subscription, being of small size, has been employed as an infant school since the erection of the National School.

Mr. William Newton, late of Stagwood Hill, by his will, dated 7th day of April, 1827, bequeathed as follows:— “Unto ten poor persons belonging to the township of Fulstone aforesaid, one stone each of good wheat flour, out of my estate at Stagwood Hill aforesaid, to be delivered to them by the owner for the time being of such estate, or by his direction, on Saint Thomas’s day, in every year for ever.”

The enclosure of Common Lands of this township took place in 1816, comprising 740 acres.

Continue to Chapelry and Church of Holmfirth...