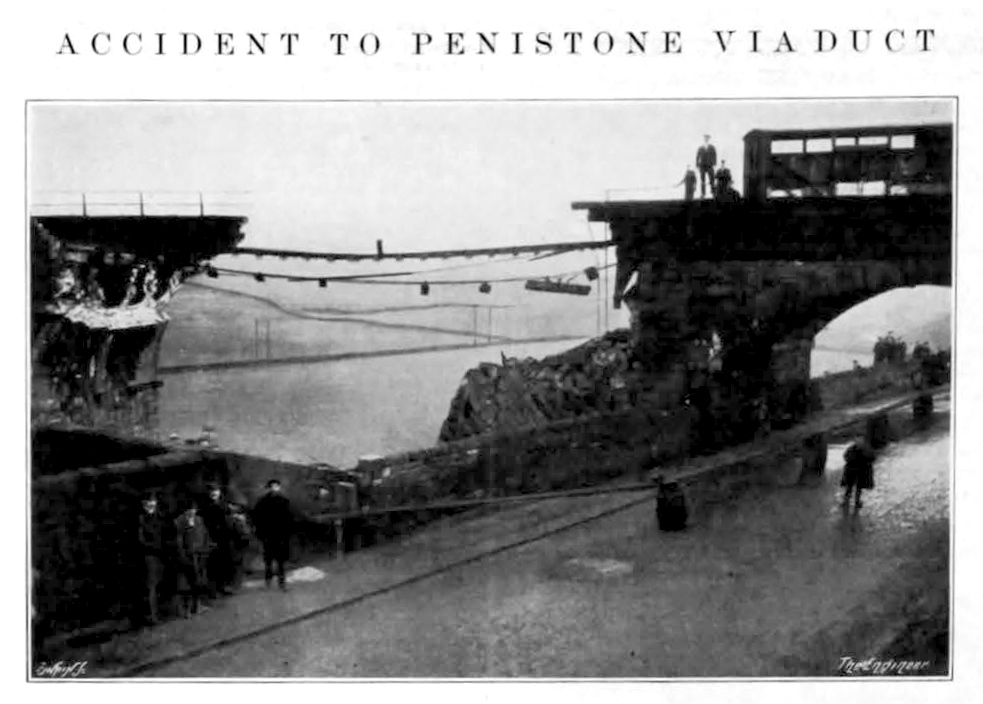 The Lancashire and Yorkshire Railway Company’s line from the Great Central's main line station at Penistone to Bradford, via Huddersfield, is carried over one of the longest viaducts in the country. About 50 yards from Penistone Station the viaduct commences its 300 yards span of the Don Valley, with the river 80ft. below. It was built of a long series of arches, carried on stone pillars varying from 60ft. to 80ft. high. The width of the viaduct is about 30ft., with a double track of rails laid upon it. It was erected sixty-seven years ago, and, as our illustration shows, one of the arches carries the railway over a road — the main road from Sheffield to Halifax. A fortnight ago a slight crack was observed in the parapet wall, but an examination of the foundations of the pillar affected failed to reveal any ground for anxiety, and whilst repairs were put in hand the ordinary traffic was continued with caution. At 4.07 p.m. on the 3rd inst. a train from Huddersfield crossed the viaduct into Penistone. Eight minutes later, whilst shunting operations were in progress on the viaduct at the station end, the track was observed to be bending, and a hollow was formed. A warning shout enabled the two men on the engine to jump and run back into safety. Then followed a crash. The viaduct was collapsing. Two arches and about 30 yards of rail plunged into the valley. Momentarily the engine poised on the edge of the chasm, then fell into the ruin, burying itself in the débris almost to the bunker. When the disaster occurred the engine was in the act of backing a number of wagons into the station, but it wrenched itself from the couplings and the train was left in safety, though one wagon, derailed, remained on the bridge spanning the roadway for some hours.

The viaduct was one of the means of communication between Sheffield and the Bradford district, and expresses from Bradford to London ran over it, passing from the Lancashire and Yorkshire system to that of the Great Central at Penistone. Consequently considerable disorganisation has been caused. A portion of the wreckage fell against the support of the arch which carries the line over the main roadway, and as a precautionary measure this road was closed to all vehicular traffic immediately after the accident, but since then grave fears have been entertained regarding this arch.

As to the cause of the collapse, irresponsible rumours of a sensational character may be dismissed. The trouble will be probably traced to the effect of the recent heavy rains on the foundation of the column, together, possibly, with the strain of exceptionally heavy traffic over the high road. Beyond that, however, the result of the official inquiry must be awaited.