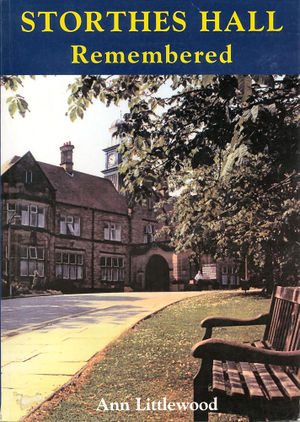 Storthes Hall Remembered was written by Ann Littlewood, and published in 2003 by the University of Huddersfield.

Search within this book:

Ann Littlewood started working at Storthes Hall Hospital in 1968, initially as a part-time Nursing Assistant. In 1976, she commenced the three year training course as a Student Nurse and gained the Registered Mental Nurse qualification in 1979. Between 1980 and 1981, she was seconded to Huddersfield Royal Infirmary as a post-graduate student and achieved the State Registered Nurse qualification.

In June 1981 she returned to Storthes Hall to manage shift 2 on Ward 10. In 1984 she moved to St. Luke's Hospital with a group of nurses to set up a ward for dementia assessment. Following this, she was promoted to Nursing Officer, initially in charge of a medical unit for the elderly, also at St. Luke's, and later as manager of the psycho geriatric unit which included the dementia assessment ward.