During the 1860s and 1880s, two stone carvings of trains were installed at Berry Brow station. The latter can now be found on display at the Tolson Museum.

Although information regarding the two carvings can be found in several newspaper and journal articles, some of the details are contradictory or erroneous. The following summary gives weighting to the articles which include details provided by sculptor John Charles Stocks[1] during the early 1930s.

The first stone carving was made by local sculptor Thomas Stocks of Berry Brow in the early 1860s and was either commissioned by, or was a gift to, William McKie[2] who was the station master until the early 1900s. The carving, which was of a train exiting a tunnel, was described in a 1908 article:[3]

[...] the engine had a very large dome over the firebox, and was without a cab, as is provided on modern engines on the Lancashire and Yorkshire Railway. Further, the tender is a four-wheel one, and the passenger coaches are distinctly of a type not constructed within the past 40 years. 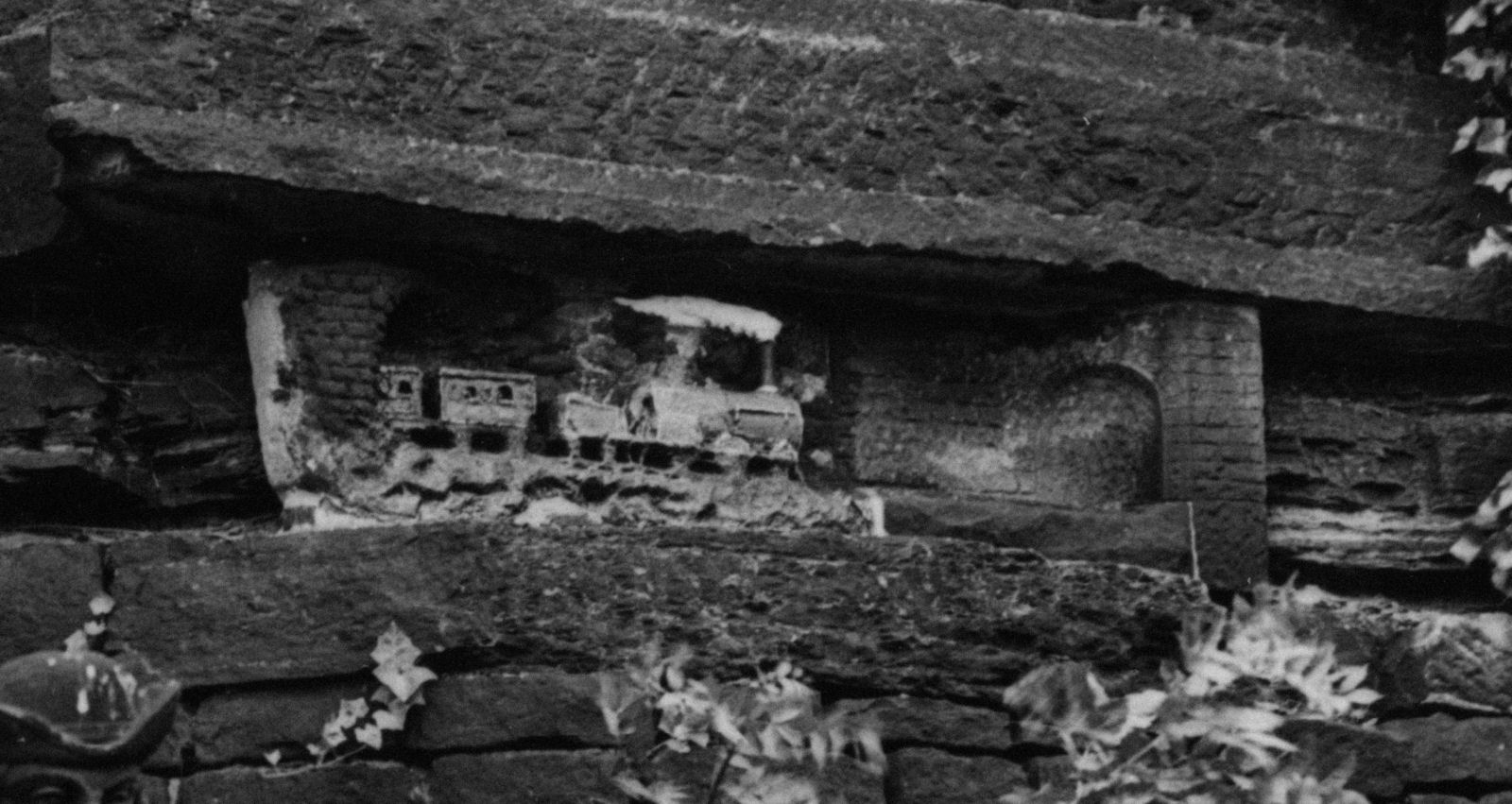 The carving was set into the wall of the up platform behind a flower bed and was framed by "rough stones" with a "striking mythical head" as a keystone. Thomas Stocks was a well-regarded carver of stone heads and his work can be found on the exterior of Huddersfield Town Hall.

Thomas' son, John Charles, began an apprenticeship under his father circa 1884. During 1886, Thomas spent "a week or two" away from Berry Brow, leaving John Charles in charge of the business. According to an article published in 1934:[4]

The boy had spent a lot of his time watching the trains in Berry Brow station, and had also taken particular notice of the carving in the rock, done by his father. It was of a train coming out of a tunnel, but the model of the engine was old, and the soft rock had worn away in many places, so young John Stocks decided that the station should have a more up-to-date carving. He set to work on some stone from a quarry near the station, and by the time his father returned, the work was complete. This carving was also of a train coming out of a tunnel, and was accurate in every detail, even to the passengers in the carriage.

The stone used for the carving reportedly came from Scot Gate Head Quarry, Honley. The claim that the first carving "had worn away in many places" is seemingly contradicted by photographs from the early 1900s which show that is was in remarkably good condition.

The new carving was installed in the space formerly occupied by the original, with the earlier carving moved up to a more sheltered location. A more elaborate surround appears to have been added at this time — perhaps to keep rain off the carving — although Thomas Stocks' original "mythical head" was initially retained as the keystone.[5]

At some later point, presumably following his father's death in 1891, John Charles replaced the keystone with a new head which is usually taken to be a likeness of engineer Thomas Swinburn of the Lancashire and Yorkshire Railway Company.

Later photographs of the carving show that two further heads — likenesses of William Shakespeare and John Milton — were added as bookends. It is uncertain when these were added and who created them, although it is possible that they were both rejected carvings made by Thomas Stocks for Huddersfield Town Hall.

The closure of the station in 1966 led to John Charles' carving being removed and transported to the National Railway Museum in York. When the new Berry Brow station was opened in 1989, plans were reportedly discussed for installing the carving, however a decision was made to place it on display at the Tolson Museum.