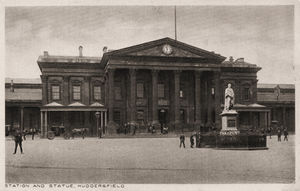 Following the death of Sir Robert Peel in July 1850, a committee was formed with the intention of raising funds to erect a statue of the former Prime Minister in the town centre.

Despite raising a total of £450, the committee could not reach a consensus on who should be commissioned to create the sculpture and the project remained in limbo. In June 1868, a new committee was formed to raise further funds and renowned sculptor William Theed (1804-91) was selected in October 1869. The Penny Illustrated Paper reported in March 1870 that Theed was "busy in his studio upon a colossal statue of the late Sir Robert Peel for the borough of Huddersfield".[1]

The 9 foot high statue was cut from a single block of Sicilian marble and it was mounted on an 11 foot base made from Aberdeen granite. The reported cost was £950 for the statue around £50 for the base.[2]

Plans to erect the statue in front of the Railway Station in St. George's Square were initially thwarted by objections from Sir John William Ramsden and the railway companies who owned the station. However, after an alternate site on the Upperhead Row was selected, the objecting parties relented. 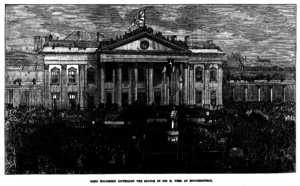 The statue was unveiled by Lord Houghton in June 1873 in St. George's Square and the Chronicle estimated 40,000 people attended the event. The following engraving, which appeared in the Illustrated London News, clearly shows that a large number of people had climbed onto the roof of the railway station in order to watch the ceremony.

In April 1887, it was reported that the statue was in a "disgraceful condition" and consideration was given to relocating it to Greenhead Park.[3]

By the late 1940s, the crumbling Sicilian marble meant that the statue was eventually deemed unsafe and it was removed on 31 October 1949. The statue itself was apparently broken up but the Aberdeen granite base was eventually re-erected in the grounds of the Tolson Museum in Ravensknowle Park in March 1971.

In 1999, a bronze statue of Harold Wilson was unveiled in St. George's Square by Prime Minister Tony Blair.

For many years a statue of Sir Robert Peel stood in front of the station. The Peel Monument Movement came into existence in 1850 when there were forty-four members on the committee. During the first successful year many subscriptions were raised. When the time came to chose a sculptor, however, there were many dissensions which put a stop to all proceedings for seventeen years.

The movement was revived on 20th June 1868 when it was discovered that there were only ten surviving members of the original committee, five of whom had left the town. A new committee was formed and, in a push towards a completion of the scheme, the town was divided into wards and collectors appointed to call on the people in their respective wards in the hope of increasing the £450 held by the original committee. On 21 st October, 1869 the committee announced that they had accepted the model of a Mr Theed for the Peel statue which was to be in Sicilian marble, nine feet high on a granite pedestal, ten feet high. The cost would be £950 with £56 for extra bronze reliefs on the pedestal.

On 17th January, 1873 at a meeting of the committee it was announced that neither Sir John Ramsden nor the railway company would allow the statue to be erected in the Square. Consequently and in desperation, the committee decided to erect it on an open space in Upperhead Row. However, the authorities soon relented and later the same year the statue was unveiled in front of the station. It stood there until 1949 when, because the stone was deteriorating, it was removed and, as no-one now knows its whereabouts, presumably it has been destroyed.