The Star of the Day was a beerhouse situated on Oldfield Road, Oldfield, Honley. It was briefly also known as the Rising Sun in the mid-1860s.

Following its closure in 1910, it reverted to its former use, becoming the Star House Farm.

It was established circa 1862 by Frederick Heap (c.1828-1893), a former woollen manufacturer of Towngate, Netherthong (1851 Census) and later a farmer of 10 acres at Lower Oldfield, Honley (1861 Census). Heap unsuccessfully applied for a full licence at the Brewster Sessions of 1865 and then again the following year when he gave the beerhouse's name as "The Rising Sun". By 1871, Heap had moved with his family to Moldgreen where he worked as a wool agent and commercial traveller.

Lydia Green took over the beerhouse licence circa 1867.

By 1873, an adjacent field was being used for sporting events such as running and wrestling.[1] 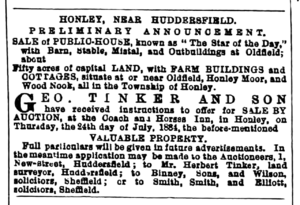 By the early 1880s, the owner of the property was Joseph Haigh, proprietor of the Hyde Park Running Grounds in Sheffield. However, his bankruptcy led to the property being advertised for auction on 24 July 1884:

SALE of PUBLIC-HOUSE, known as "The Star of the Day," with Barn, Stable, Mistal, and Outbuildings at Oldfield; about Fifty acres of capital LAND, with FARM BUILDINGS and COTTAGES, situate at or near Oldfield, Honley Moor, and Wood Nook, all in the Township of Honley.

The next owner of the premises was apparently Frederick Learoyd who "spent a considerable sum of money upon it" and "fitted [it] up with every modern convenience". However, that was not enough to persuade the magistrates that the premises should be granted a full licence at the 1885 Licensing Sessions. By then, the Star of the Day was reported to be the "favourite meeting place of the Holme Valley Hunt".[3]

In July 1885, Learoyd asked his friend, Bradford artist Charles MacLaren Wigney, if he would paint something for him, and it was informally decided that a painting of the landscape at Wood Nook to the value of £25 would be commissioned. Wigney and his family were invited to stay for 10 weeks at the Star of the Day as Learoyd's guests whilst he prepared preliminary sketches. By the time of the Honley Feast, the painting had been completed and the Wigney's returned to Bradford. It then became apparent that Learoyd and Wigney had not entered into a formal contract — Wigney had expected to be paid the £25 for the painting, whilst Learoyd felt the painting was in lieu of the cost of the 10 weeks of board and lodging for Wigney and his family. The case went to court where it was agreed there was no formal contract and the painting was returned to Wigney.[4]

In February 1886, road labourer Ben Brook (aged 58) of Upper Bridge, Holmfirth, had been drinking at the Star of the Day before setting off for home at around 9pm. At around midnight, he was found "lying helpless on the highway" by Honley labourer Samuel Wimpenny. Although Brook then went to the Honley gasworks to fetch help, they did not return until 7am the following morning, and Brook died a few minutes later. Brook's body was covered with bruises and his clothes were wet and dirty. At the subsequent inquest, it was decided that Brook likely stumbled off the highway in a drunken state before collapsing.[5]

On February 6 1886, Lydia Green left the premises (possibly to take a short holiday) and a widow named Fanny Fry took over. She was then visited by Sergeant Miller who told her that she would need to have the beerhouse licence transferred to her in order to sell beer legally. A couple of weeks later, Sergeant Miller returned with Police Constable Dalby and found that Mrs. Fry had not done so — "Yes, we meant to get a transfer, but we have not got one yet." The case was taken to court, where Frederick Learoyd stated that he had been informed that Fanny Fry was Lydia's sister and that, as he had paid the cost of the beerhouse licence, he regarded himself as the licencee. In Green's temporary absence, he was responsible for the "conduct of the house", not Mrs. Fry. The magistrates agreed and the case was withdrawn.[6]

Perhaps as a result to the court case, the licence was transferred to Thomas Alfred Walker at the end of March 1886. The next recorded licencee was Alice Lees who unsuccessfully applied for a full licence at the August 1886 Licensing Sessions.[7]

The contents of the property were advertised for auction on 7 and 8 July 1886.[8]

It is believed that the premises was then purchased by Honley butcher Thomas Biltcliffe. After his death, his widow Ruth became the owner and she moved with her children to Blackpool to run a lodging house. She later leased the premises to brewers Bentley & Shaw Ltd. of Lockwood.

In September 1894, landlord Walker Dyson was charged with permitting drunkenness on the premises, but it was not proven that Dyson was aware the men were drunk and ordered them to leave when he was alerted by the police constables. Instead, the magistrates charged the men (farmer Henry Graham and labourer Samuel Farrell) for being drunk on the premises.[9]

Frederick Hadfield became the licencee in April 1901. A few months later, the licence was transfer to his father-in-law, Charles Allkins. The latter had reportedly lived for 17 years in America where he had kept a saloon and was known by the nickname "American Charlie". It seems Allkins suffered from depression and drank heavily. In January 1903, he committed suicide at the Wakefield Temperance Hotel by taking an overdose of laudanum.[10]

The premises was referred to the Compensation Authority in March 1910 who cancelled the licences and awarded £582 in compenstation. The Star of the Day closed its doors for good on 21 December 1910 and reverted to being a farm (Star House Farm).

n.b. dates given in parentheses are those of the licence transfer