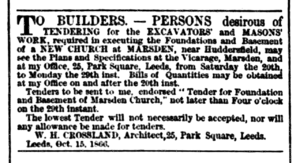 The foundations of the current church were commenced in 1866 but work ground to a halt following a dispute between the contractor and the church committee over the spiraling costs — the foundations alone had taken up around £2,800 of the available £4,000 of subscribed funds. The abandoned church was designed by architect William Henry Crossland.

Work finally started again in the early 1890s to a joint design by archtects James Sheard Kirk of Huddersfield and C. Hodgson Fowler[3] of Durham. The new church was consecrated on Saturday 12 October 1895 by the Bishop of Wakefield.[4]

The corner stones of the chancel were laid on Saturday 25 June 1898. The work was carried out by masons Messrs. S. & J. Whitehead of Oldham.[5]

Anglican churches | Buildings | Churches and places of worship | Listed buildings and monuments | Stub entry
This page was last modified on 31 December 2020, at 15:00.