Snailsden Reservoir is situated approximately 3 miles south of Holmfirth and is within the border of South Yorkshire.

The application was granted under the Dewsbury and Heckmondwike Waterworks Act of 1876, however work did not commence on construction until the mid-1890s. Permissions was also given for the construction of an access road, passing close to Cook's Study. 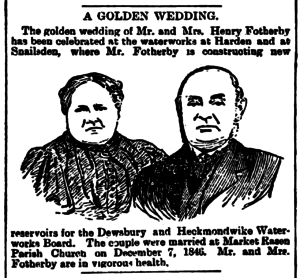 In December 1896, the Yorkshire Evening Post reported that Henry Fotherby, who was constructing the new Harden and Snailsden reservoirs, had celebrated his golden wedding anniversary.[2]

The construction of the reservoir was overseen by Henry Dearden, Dewsbury's borough engineer and surveyor.[3]

On 11 August 1921, Harry Sandford drowned himself in the reservoir, after his 74-year-old father William collapsed from a suspected heart attack.

The body of 38-year-old Jonathan Pardon of Fartown was recovered from the reservoir by police divers in 2014.[5]