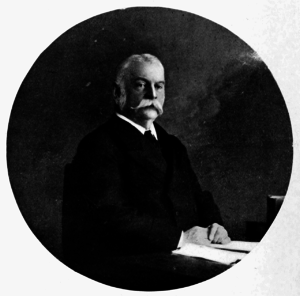 In looking over an old minute book the other day I saw these entries:—

“April 26th, 1869. — Mr. R. Armitage in the chair, when it. was resolved to have a knife and fork tea to celebrate the return of Milton and Beaumont, and that the chairman and Godfrey Woodhead secure the Baptist Sunday School for the occasion.”

Reading on in the same book, I found:—

“With Mr. Thomas Sykes in the chair, on the 4th of June, it was resolved that John Sugden give a lecture on ‘The Irish Church Bill,’ that the society pay all the expenses, and that fifty bills be printed; and at this meeting in the Baptist School that we petition the House of Lords in favour of Mr. Gladstone’s Irish Bill; that Mr. Joseph Hirst propose and Mr. Godfrey Woodhead second the resolution to the House of Lords; and that Mr. Armitage propose and Mr. John Wright Wood second a. vote of thanks to the lecturer.”

“June 15th, 1869. — It was resolved that Slaithwaite be recommended as a fit and proper place for a polling booth. That Messrs. Frank Curzon, Moore Sykes, and John Sugden be the next speakers.”

“The next meeting was held July 16th, 1869, Mr. Thomas Sykes in the chair, when it was resolved that Messrs. J. B. Robinson. Thomas Sykes, George Haigh, and E. J. Sykes be appointed to superintend the Slaithwaite Electoral District.”

“Again Mr. Sykes was at a meeting on August 6th, 1869, when it was resolved that Mr. John Bright’s speeches be purchased as then published for the benefit of the members.”

“September 22nd. — It was again resolved, under the same auspices, that Mr. Sugden’s lecture on Lord Byron be on Tuesday, the 28th, in the Baptist School.

“March 29th, 1870. — At a meeting again it was resolved to send Mr. John Horsfall a vote of thanks for contributing the Leeds Mercury.”

“May 5th. — It was resolved that we cease taking in the Star, and provide the Huddersfield Examiner in its place.”

It will be seen by the above what Slaithwaite was doing at this early period. What good and true men there were, every ready at their country’s call! I have found in after life a contrast. Some men do not present very imposing figures either, let me say, as candidates to be put up or members to be returned to seriously deserve the support of such hard workers. Many members of Parliament get in by their wealth; others by the influence of their wife or family, or both; and know little, and perhaps care less, about the constituency. See these at election times! Fine ladies, and, let me say, good ladies, too — how they do work for husband and friend! The places they go to and the labour they bestow is really marvellous, deserving every respect and consideration. How the subscriptions are sought after and the patronage begged is only known to the suffering member. The wonder is why they do it, but they do. I have often thought what hard lines it is upon a worldly man when he has to go to a chapel for political purposes — say kneel in prayer with an honest minister — when it is to be feared he feels himself to be in the wrong place, and is very likely reckoning up in his own mind what the subscription is to be, and what amount will best command the place. Then there are others who go to Parliament for business — as carefully totalled up an item’ as any in the ledger of the keen eye of this class of politician. A true man has much to put up with. When he gets to London all goes well if he votes with his party, and is content to efface himself behind the front bench on either side. Let them do the talking. What he has got to do is to vote as he is told. Not much political knowledge is needed, but plenty of money for party purposes. This is the correct thing; but woe — unutterable woe — to a member who dares to think for himself politically. Then there is the real earnest politician, who in his heart of hearts wishes to do good for his country, line worthy class is too often pushed aside for the professional who makes it a study, or chooses the game as a platform from which to promote his own ends in life, the goal of which is the ministerial bench, and during the ascent gathers honey all the way for himself and connections. This kind of thing has largely disgusted the old Liberal workers, who are getting careless where they used to be diligent, and now wonderingly do nothing.

The partisan seems astounded that there are no responses to old appeals. The fact is the worker has begun to think for himself, remembering there are other times of more importance than elections, and it is to the former he must look, and not the ephemeral raptures of the latter.

In the dear old days many good fellows came to help Slaithwaite. Messrs. Wright Mellor, C.H. Jones, Joseph Woodhead, J.B. Robinson, and others, in their varied modes, rendered yeoman service to the progressive cause. Later, Lord Rosebery came, amongst many others. One cannot help expressing wonder at the labour that had to be gone through to secure men so eminent to-day. We are bound to have a loving regard for this nobleman, not only for his valuable services of the past, but for what he will be able to do in the future. I could follow him now if the dead mantle of Home Rule did not haunt him, hamper his action (at least as it appears to the Liberal Unionist), mar his usefulness, harass his progress, and destroy so much what is necessary for the leader of a great, united, and imperial policy. What a chance if this crippling garb were out of the way for a noble leader! Because at this age so many of the old lines are rubbed out by the new requirements of a greater Britain, which the noble lord could secure if he were not weighed down by this dead skeleton, and which, so far, he has not had the courage to put away entirely for the comfort of his own mind and the benefit of what would be to a grateful country. Until then, quite as good men rule who will have nothing to do with the unclean thing of Home Rule. That split of 1887 was a terrible disaster to the Liberal party, broke it into fragments, destroyed a great engine for good, and the spirit of the more rabid Gladstonians did not mend matters. You had either to follow; do as you were told; or be politically damned. Well do I remember being the honorary secretary of the Liberal 200 in Huddersfield. I had increased my subscription, was a member of two other Liberal Clubs, but because I (with others) could not swallow Home Rule, and had been the means of getting the Duke of Devonshire to speak for the Liberal Unionists in the Town Hall, in which I joined with a few words, the Liberals became very angry, took their names off my nomination paper as councillor for the Lockwood election, which was near at hand, and out of pure spite and ill-will brought a man at the last moment to oppose, and not having time to get assistance they turned me out with great rejoicing. To this they were then, and are to-day, welcome. We will not blame them; very likely they would be as arbitrary to-day. A long journey in the wilderness has not had a sobering effect upon them in all this time. Anyway, we bad to go somewhere, so we started a Liberal Unionist club for Huddersfield, which has rendered excellent service, and is now ably presided over by J.C. Broadbent, Esq.[1]

In the borough, at the time of the split, if Mr. E.A. Leatham would only have come to Huddersfield as had been arranged, and not failed (as he ignominiously did), it is my firm conviction that he would not only have been living now, but certainly the continued member. Oh, what a blunder! How he delivered himself into the hands of his bitter enemies; those who had been his greatest admirers, and to whom he had rendered a life-long service of mutual goodwill, to which was added national progress!

How different things would have been to-day in Huddersfield from my point of view! It will not bear looking at; and we must mourn in silence, and work while it is day, to put on a better complexion.

From 1887 to 1892 were stirring times in the Colne Valley. Things had not been allowed to sleep. Mr. H. F. Beaumont, the first member of the division, had been a little undecided. At the split he did not clearly state his position; there was a little conflict between him and the committee. There was no doubt but that he was against Home Rule, and he should have said so boldly and, if need be, have fought the constituency on the vexed question. A lot of ill-will would have been avoided. Approaching 1892 we were prepared to run Mr. Beaumont, but at last the gentleman would not stand, and we were bound to get another candidate. Many came from far and near. Three of the honoured Brookes were asked, and the unexpected came in the choice of the unfortunate writer of these notes, who never asked for it or wanted it, and still less cared. But what could one do? They made the way easy in money; they gave me that great and good man, Sir Thomas Brooke, Bart., as my chairman; they gave me full liberty; and never man had greater kindness shown or better help given, such as to receive my gratitude, as long as I live. I was left with no other course but to do the very best in my power to deserve the confidence, perhaps mistakenly reposed. Be this as it may, we entered the lists against so formidable an opponent as Sir James Kitson, Bart., the respected member, with whom, then and since, every good feeling has been retained. The only thing one regrets, even to-day, was the bitterness of articles written at the time, when political passion seemed to blind not only all fairness and justice, but carried the hostility to even bitter enmity. Yet this did not bother me so much as the remark made to me one day, viz.: that they (remember, my dear, dear friends; the Liberal party) had made me, and that they would ruin me. This roused my anger, and I said “D— you; go at it. I deny one and defy the other.” This was foolish on both sides, and happily these were the only things that marred as good a fight as ever was waged in the valley, and it could not be possible to leave less sting behind. The result was a handsome defeat, loss of health (which has never fairly come back), and some trade which never returned.

The fuller story may at some time be told; but, here and now, as a modest man, I will put down my pen for better and more impartial hands to take up, if need be. History will do justice; and if others do better for the Colne Valley I will rejoice greatly, because it is the place of all others I love best. It gave me birth; it will find room for my bones; and all who render it a service earn my goodwill, and ever afterwards gain my gratitude.

Slaithwaite Notes: Past and Present (1905) by John Sugden

Pages with Public Domain content
This page was last modified on 20 October 2016 and has been edited by Dave Pattern.