Shepley is a village situated 8 miles southeast of Huddersfield.

Historically it was also a township within the ecclesiastical Parish of Kirkburton and formed part of the Manor of Wakefield.

The place name is generally taken to mean "sheep wood" or "sheep clearing" from the Anglian "scep" (sheep) and the Old English "leah" (forest, wood, glade, clearing, pasture or meadow).[1] 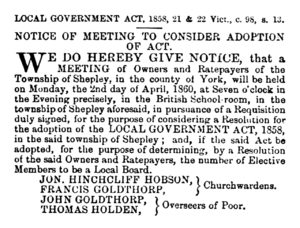 Shepley Local Board was formed in April 1860 with an initial elected membership of nine. At the end of 1894, it was superseded by Shepley Urban District Council until 1 April 1938, after which the district became part of an enlarged Kirkburton Urban District.

Shelley and Shepley are townships, and High Burton is a hamlet, all in the parish of Kirk-Burton, the same manufactures prevail throughout, and at High Burton several of the inhabitants are occupied in the making of edge tools. Population of Shelley about 1,400, and of Shepley nearly 1,000.

SHEPLEY, a township, in the parish of KirkBurton, union of Huddersfield, Upper division of the wapentake of Agbrigg, W. riding of York, 7 miles (S. E. by S.) from Huddersfield; containing 1088 inhabitants. It comprises by computation 1250 acres of land; and the village, sometimes called Over and Nether Shepley, is situated in a deep valley, on the road from Huddersfield to Penistone. The population is engaged in the manufacture of cloth-blankets, flannel, and knitting-yarn. There is a place of worship for Methodists of the New Connexion.

SHEPLEY, a township-chapelry, with a village, in Kirkburton parish, W. R. Yorkshire; on the Huddersfield and Sheffield railway, 6 miles SE by S of Huddersfield. It has a station with telegraph on the railway, and a post-office under Huddersfield. Acres, 1,250. Real property, £3,504. Pop. in 1851, 1,200; in 1861, 1,432. Houses, 286. The property is much subdivided. Hall-Royd House is the residence of Mr. S. Armitage. There are several woollen manufactures. The living is a p. curacy in the diocese of Ripon. Value, £86. Patron, the Vicar of Kirkburton. The church was built in 1848. There are a New Connexion Methodist chapel and a British school.

Place-Names of Kirkburton, Shepley and Shelley (2009) by George Redmonds:

The place-name Shepley has a straightforward etymology, for it is made up of two Old English words that mean ‘sheep - clearing’. It is identical in most respects with Shipley near Bradford although the spelling of the local place-name is said to reflect Mercian influence rather than Northumbrian. Even so there has been confusion between the two, notably by Professor Smith when he discussed Shipley. On the Jefferys map of 1775 the village is shown as consisting of two distinct groups of dwellings, named Over and Nether Shepley. later these became Upper and Lower Shepley. The names are topographically accurate but there is likely to be more to it than that. The inference may be that the two parts of the village began to develop as separate entities in the 1400s, after the lordship had been divided into two halves. It was a situation that lasted into the 1830s, for William Ellis was said to be of Lower Shepley in 1833. When buildings such as the church, the vicarage and Providence Chapel filled in parts of the Green the distinction was lost. Shepley is the ‘specific’ element in several compounds such as Shepley Beck, Shepley Dike and Shepley Road, names which require no linguistic explanation. Unfortunately, they may be applied to more than one stream or highway and should always be carefully identified, using maps and documents.

The extent of the Civil Parish of Shepley (compiled from O.S. maps of the early 1890s) is shown below.

Civil Parishes | Ley (toponymy) | Parish of Kirkburton | Places | Townships and Chapelries | Towns and villages
This page was last modified on 4 March 2021, at 09:57.