He was born in Shepley in 1799, the illegitimate child of Elizabeth Senior, and was baptised on 16 June 1799 at St. Nicolas, Cumberworth.[1]

It is believed he married twice and had two children from the first marriage. He married Martha Wood on 25 December 1828 at All Hallows, Almondbury. He had eight known children from his marriages: 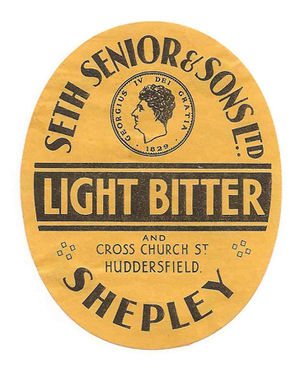 He began brewing in 1829, reportedly after being loaned a sovereign. His home became the Sovereign Inn and the brewery expanded into Seth Senior and Sons (circa 1865) based at Highfield Brewery, Shepley.

He was also the owner of the Box Ings Colliery, Kirkburton.

On 17 February 1846, Henry Senior was returning from the wedding of his brother-in-law (George Hirst) with his wife Sarah and their friends when the cart they were travelling overturned on Shelley Bank. After they picked themselves up, they found Henry laying motionless by the side of the road and carried him to a nearby toll-bar house, where he "breathed twice heavily" and died. He was buried on 21 February at St. Nicolas.

Reuben Senior had suffered his entire life from "a bronchial affection" and regularly "obtained relief from sea voyaging". The weather over the winter 1887/88 was "dull and foggy" and he decided to visit a friend on the Isle of Man. He wrote from Liverpool to say "he thought he had caught a little cold" and died shortly after reaching the Isle of Man.[9]