Sefton Mills — originally known as Mill Moor Mill — was a woollen and cotton mill situated off Mill Moor Road in Meltham, next to Meltham Dike.

In newspaper articles, it was sometimes referred to as the Meltham Cotton Mill. 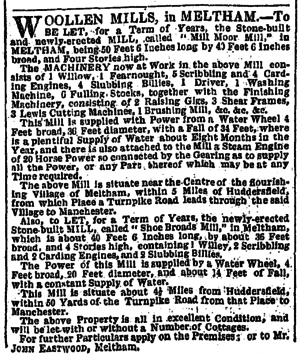 Along will Shoe Broads Mill, Mill Moor Mill was advertised for let in the autumn of 1838:[1]

To Be Let, for a Term of Years, the Stone-built and newly-erected MILL, called "Mill Moor Mill," in MELTHAM, being 50 Feet 6 Inches long by 40 Feet 6 Inches broad, and Four Stories high.

This Mill is supplied with Power from a Water Wheel 4 Feet broad, 36 Feet diameter, with a Fall of 34 Feet, where is a plentiful Supply of water about Eight Months in the Year, and there is also attached to the Mill a Steam Engine of 20 Horse Power so connected by the Gearing as to supply all the Power, or any Part thereof which may be at any Time required.

The above Mill is situate near the Centre of the flourishing Village of Meltham, within 5 Miles of Huddersfield, from which Place a Turnpike Road leads through the said Village to Manchester.

By the late 1840s, the cotton spinning firm of John Eastwood & Sons was situated at the mill. The firm's partnership was dissolved in May 1855.

The mill was placed up for auction on Friday 15 May 1868.[2] Several pieces of machinery were then auctioned separately on 15 June.

In the late 1850s, 24-year-old Sarah Earnshaw was a worker at the mill, which at time was owned by Edward Coleman Gooddy. One afternoon in January 1859, she had been bagging up cotton along with two teenager boys — Henry Hirst (17) and Joseph Hall (16) — when Hall punched her on her chest, apparently in a playful manner, to which she replied "Thou should not have struck me on the breast!" The blow was strong enough to leave a bruise. Earnshaw took ill a couple of days later and died.

There was much excitement at the subsequent inquest into her death, as speculation had spread that she had died as a direct result of Hall's blow. Surgeon Thomas Allen Haigh had examined Earnshaw four hours before she died and later performed a post mortem examination. He reported that Hall's blow had apparently been hard enough to fracture one of her ribs. However, she had long been suffering from poor health, and Haigh found evidence of lung and heart disease, as well as a softening of the brain tissue. The immediate cause of death had been a blood clot on the brain, which he felt unconnected to the Hall's blow.

Ann Moseley gave evidence that Earnshaw had previously complained of dizzy spells and that Hall had "often often done the young woman's [i.e. Earnshaw] work, and given her his food". The Coroner stated that Earnshaw had "not been living a reputable life", perhaps implying that she enjoyed flirting with the teenagers.

The jury seemed to be of the opinion that Earnshaw might have damaged her rid in a previous accident, as they felt it seemed unlikely the blow, which was described by several witnesses, was hard enough to have fractured a rib. A verdict of death from "effusion of blood upon the brain" was returned and the Coroner told Hall, "I hope it will be a lesson to you as long as you live, never to strike [a woman]."[3]

In September 1861, 52-year-old spinner Benjamin Sykes died at Huddersfield Infirmary following an accident at the mill, which was at that pointed owned by Messrs. Ramsden and Walker. Together with John Mosley, he had been working when his clothes became entangled and "was caught by the shaft, and instantly whirled round and crushed amongst the machinery." The inquest into his death returned a verdict of "accidental death". He left behind a wife and seven children, two of whom also worked at Mill Moor Mill.[4]

By the 1880s, the mill had become known as Sefton Mills.

According to a notice placed in the Huddersfield Chronicle (24/Dec/1881), the mills were due to be auctioned in January 1882 and were apparently bought by Joseph Armitage.

By the early 1890s, the mill was owned by William Wood and Co., but they appear to have gone bankrupt in 1894. After a meeting of creditors in mid-October 1894, it was decided to auction of some of the assets of the mill, so that "satisfactory arrangements [for] a fair dividend might be realised."[5]

A few weeks later, on 8 November 1894, a busy auction of heavy woollen machinery and raw materials was taking place in the weaving shed of the mill when a large section of the wooden floor suddenly collapsed. Between 30 to 40 people were fell down into a disused gasometer tank below, which had around 18 inches in mud in it. James Bentley Crosland, son of Alderman James Crosland, was trapped face down in the mud under a pile of debris and suffocated before he could be rescued. One of the auctioneers, James Waterhouse Taylor, later died on 6 December.

The following were also reported to have been injured in the incident, although many of the walking wounded returned home before their details could be taken:

The inquest held on 10 November heard from that the supporting beam had been examiner and found to be rotten and returned a verdict of "accidental death" for James Bentley Crosland. A separate inquest was not held when James Waterhouse Taylor subsequently died a few weeks later after contracting pneumonia at Huddersfield Infirmary.

Despite the loss of life, the auctioneers held a second auction at Sefton Mills on 26 November.

The mills themselves were auctioned in June 1895 and described as:

comprising main mill 51ft. by 40ft. by four and a half storeys high, weaving shed 124ft. by 59ft., with dye-rooms and store places under part, engine-house, boiler-house, with stove over, stone-built chimney shaft, together with outbuildings, reservoir, and vacant land thereto belonging. The motive power consists of beam steam engine, 4ft. 8in. stroke, 27in. cylinder, 16½ft. fly-wheel, iron water-wheel, 32ft. diameter by 4ft., Arnolds' boiler, 22ft. by 6½ft. diameter, main and counter shafting, gearing, steam, gas, and water piping and fittings in and upon the above premises.

The dike next to the mill was crossed by a set of stepping stones, but they were regularly washed away after heavy storms. The Meltham Urban District Council meeting of 21 August 1895 discussed the erection of a footbridge and a decision was made to draw up plans.[7] The next meeting of 4 September approved the plans on the proviso that the wooden bridge not cost more than £36.[8] A month later, the 2 October meeting accepted the tenders of stonemasons John Moorhouse and Sons (£15) and joiner Mr. G. Pogson (£14 5s.) for the building of the bridge.[9]

A small fire broke out in the teasing room of the mill on Wednesday 20 December 1916. The fire was brought under control by the workforce before the Huddersfield Corporation Brigade arrived.[10]

The mills were demolished at some point after 1978 and residential properties were built on the land.

The location of Sefton Mills is highlighted in red on this 1906 map of Meltham:

Residential property on Sefton Lane now occupies the former site of the mill:

Buildings | Demolished buildings | Mills
This page was last modified on 9 April 2019 and has been edited by Dave Pattern.