Scholes Local Board was the local authority body responsible for issues relating to public health in the former hamlet of Scholes (which was mostly in the township of Wooldale) and was formed following a meeting held at the Boot & Shoe Inn on the evening of Thursday 17 July 1862. The local board initially comprised 9 members.[1] 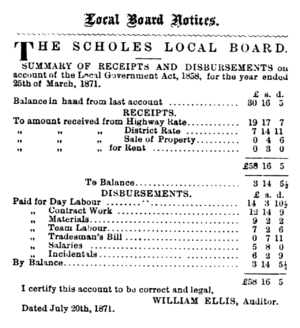 The road surveyor of Scholes applied to the Huddersfield magistrates to transfer his accounts "prior to the formation of the Local Board" in January 1863.[2]

Retired woollen manufacturer Charles Lockwood (c.1816-1895) of Moorcroft, Wooldale, served as the Chairman from at least 1890 until his death in January 1895.