Samuel Routledge was a cloth dyer based in the Seed Hill area of Huddersfield.

After expanding his business to create links with Australia, he ran up sizeable debts and was declared bankrupt in 1854. The following year, his house was at the centre of the Seed Hill Ghost hoax.

He was baptised in January 1803 in Brampton, Cumberland.

Of Routledge's early life, little is known except that he married Jane Wilson on 29 June 1822 at Burgh by Sands,Cumberland, and that he was working as a dyer in Huddersfield by the 1830s. 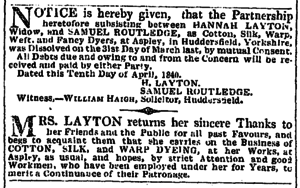 In April 1840, he announced via a public notice that his partnership with Hannah Layton in Aspley had been dissolved and this is presumably when he set up his own business in nearby Seed Hill.[1]

Throughout the 1840s, Routledge was linked to campaigns to improve the district's railway links.[2]

His first wife, Jane, died on 4 October 1842, aged, 40, after a short illness.[3] The couple had at least one daughter, Jane Routledge, who married George Railton on 28 January 1843 at the parish church in Wakefield.[4]

In November 1844, a newspaper advertisement for "Stuckey's Patent Filters" claimed that Routledge had placed an order for "a filter to remove the dirt from about 250,000 gallons of water daily".[5]

He married his second wife, Elizabeth Mills, in Sheffield on 24 February 1845.[6] The couple had three daughters before Elizabeth died in 1849, aged only 37: 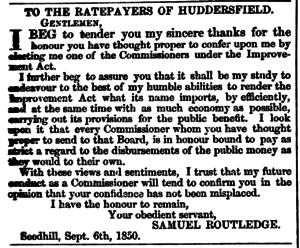 In the early hours of 19 July 1851, a fire caused extensive damage to his dye works and losses were estimate at being in excess of over £5,000.[13] The fire was brought under control before it could spread to Routledge's house and the dye work's engine house was quickly repaired. It was reported that Routledge had no insurance but that he had begun work immediately to demolish and rebuild the fire-damaged buildings.

In 1852, Routledge was able to secure a £5,000 bank loan from the West Riding Union Banking Company, backed by guarantees by his friends, for the purposes of expanding his business and forging trade links with Australia. By June 1853, he was reported £4,500 in debt to the bank, and had further outstanding debts of of £5,765.

Bankruptcy and the Seed Hill Ghost 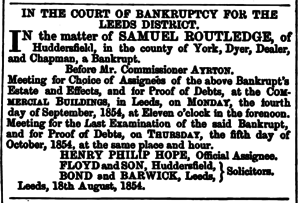 In August 1854, Routledge was declared bankrupt. At the court hearing in Leeds on 13 November, it was statued that the bankruptcy arose from "the tardy return on consignments of goods to Australia, by Mr. Routledge, to his agents there, amounting in the aggregate to nearly £30,000".[14]

Despite apparent attempts by his creditors to sell off his company and his house, it appears Routledge was able to remain living at Seed Hill until his death two years later. A court case ensued in July 1855 in which his bank argued that those who had guaranteed the £5,000 loan should be liable for settling Routledge's debts.

In mid-March 1855, inexplicable loud knocking noises began in his house, leading some to believe that the property might be haunted. The Seed Hill Ghost soon became the talk of the town and attempts by local tradesmen and the police failed to resolve the mystery. Eventually it was discovered that a young Irish servant girl, Catherine Hayley, had been responsible for the hoax, as she had taken a dislike to Routledge's new housekeeper and hoped to scare her away.

In March 1856, another fire broke out at the dye works, but was quickly extinguished and caused estimate damage of £40 to £60.[15]

Despite his bankruptcy and the unwanted attention the hoax brought him, he married Margaret Thompson at the Church of St. John, Newcastle-upon-Type, on 1 May 1856.[16] However, the marriage was short lived and Samuel Routledge died only a few months later, aged 53. He was buried on 23 August 1856 at St. Paul's in Huddersfield.

The dye works were then later taken over by J. Burgess and Son.[17]