Royd Edge Mills and Dyeworks was situated to the south of Meltham, near Royd Edge, and used Thick Hollins Dike as its water supply.

A long mill damn is situated at the south-western end of the site and runs to Hebble Lane.

It was owned by Messrs. Ramsden, Mellor and Co. during the 1840s. After their lease expired, machinery from the mill was auctioned on 9 April 1851

The next owner was Joseph Hirst of Wilshaw, who also owned a mill at Meltham Mills.

In September 1857, water levels in the mill's boiler fell causing the flue pipes to become red hot. Initially it was feared the boiler might explode and work was suspended at the mill for several days whilst repairs were carried out.[2]

Joseph Hirst and Co. went into voluntary liquidation in 1881, after which the mill was auctioned in January 1882. At that point, the mill was described as:[3] 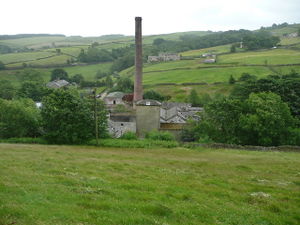 The mill was eventually sold to Jonas Brook and Brothers who "used the mill for storing, dyeing and drying". It was destroyed by fire in October 1885 whilst work was ongoing to modernise the building and to install electric lighting. Damage was initially estimated at up to £40,000, although reportedly the fire did not spread to the single-storey dyeworks building.[4] Some items were salvaged from the mill and sold in January 1886.[5]

After having stood derelict for many years and becoming a "magnet for illegal parties and drug addicts", the dyeworks were demolished in 2010 after bats that had been rousting there were rehoused.[7]

Developers James Wimpenny Homes of Shepley intend to build around 30 houses on the land.[8]