The Royal Oak is a former beerhouse situated in Honley Wood Bottom, Honley.

According to some sources, it was also known as The Three Shiners. 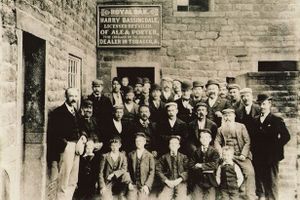 The beerhouse was situated close to the Wood Bottom Tannery.

In January 1877, Wood, was charged with having "unlawfully kept open his [beer] house after the hours for the sale of beer" on Christmas Day 1876. Although the Royal Oak was closed, it was claimed that they had allowed beer to be transported to the house of Mrs. Hirst, where it was consumed. It was also claimed that John Wood's son, William, had assaulted a Meltham farmer named John Eastwood that afternoon, resulting in Eastwood sustaining a broken arm.

When the case was put before the magistrates, some of the evidence fell apart when a number of witnesses stated that Eastwood had been very drunk and had simply fallen over in the yard outside the Royal Oak without anyone assaulting him. Whilst they felt that it was likely that the beer at Mrs. Hirst's house had come from the Royal Oak, there was no proof that Wood had received any money for it, so it hadn't technically been sold. As such, they had no choice but to dismiss the case, along with Eastwood's allegation of assault.[1]

An attempt to have the beerhouse's licence revoked in August 1890 failed when it turned out a clerical error had resulted in the objector's surname being recorded incorrectly. The clerk at the Brewster Sessions ruled that the error invalidated the objection.[2]

On the evening of Saturday 31 August 1895, tailor Allen Wood Smith of Hill Top Bank and cloth dresser Matthew Kaye left the Royal Oak at around 10pm. After getting to Kaye's house, Smith headed off towards his own house. Smith's dead body was found at 5am the following morning on the footpath leading from South Crosland factory to Lower Hall. There was no sign of a struggle, but the deceased appeared to have fallen backwards and hit his head on a stone wall. The inquest at the Rose and Crown, Netherton, gave a verdict of "accidental death."[3]

The January 1898 meeting of the Honley Local Board approved plans submitted by Messrs. Seth Senior and Sons to make alterations to the Royal Oak.

It is uncertain when the Royal Oak closed, but it is shown on the 1949 Ordnance Survey map of the area.

A partial list of dates when the licence was granted, renewed or transferred: