The responses given by J. Cuttell and Brothers of Cuttell Mill, Underbank, Wooldale, are reproduced below. 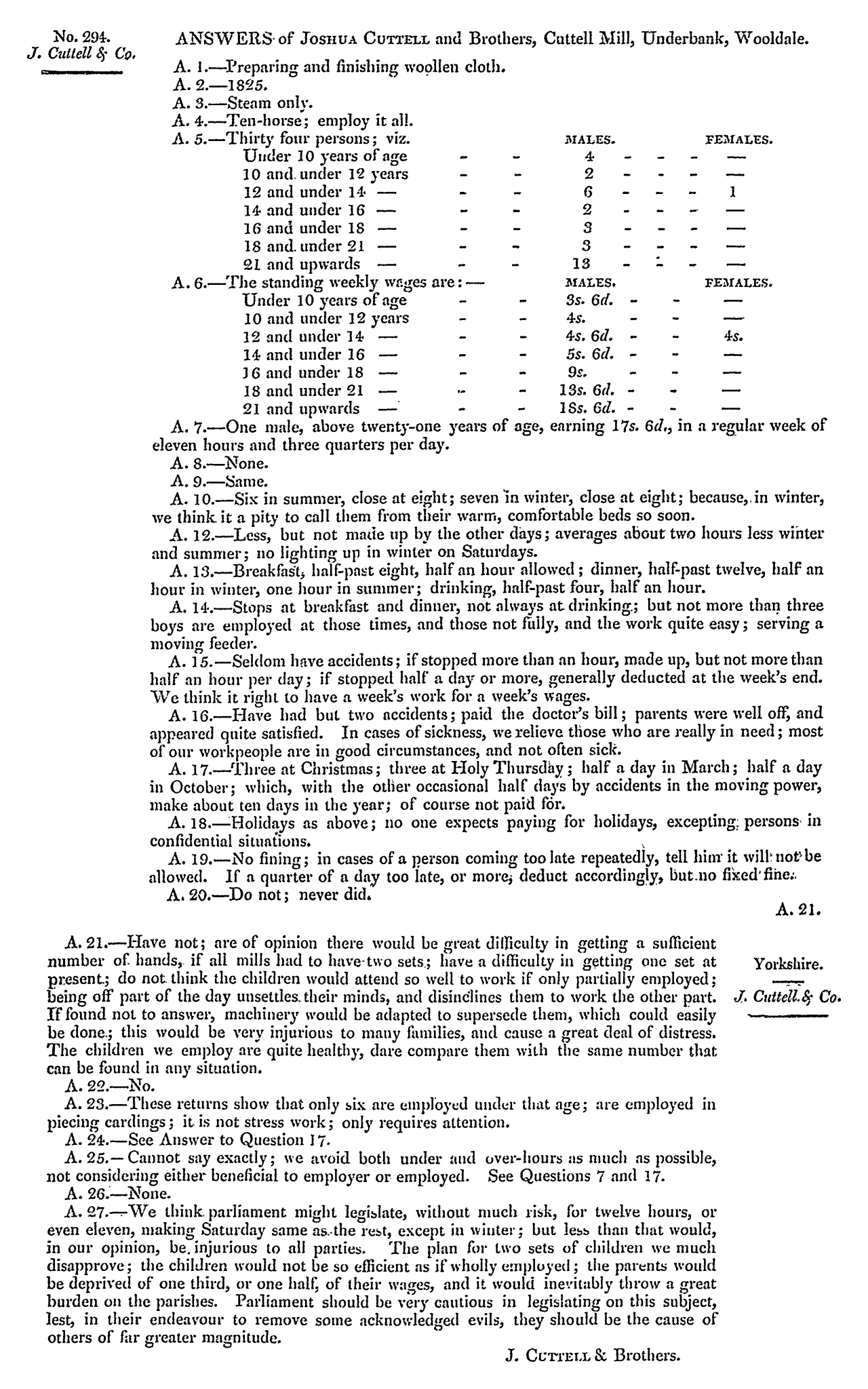 No. 294. J. Cuttell Co. ANSWERS of Joshua Cuttell and Brothers, Cuttell Mill, Underbank, Wooldale. A. 1. Preparing and finishing woollen cloth. A. 2. 1825. A. 3. Steam only. A. 4. Ten horse; employ it all. A. 5. Thirty four persons; viz. Under 10 years of age MALES. 4 10 and. under 12 years 2 12 and under 14 6 14 and under 16 2 16 and under 18 3 18 and. under 21 3 21 and upwards 13 A. 6. The standing weekty wages are : MALES. Under 10 years of age 3s. 6(1. 10 and under 12 years 4rS. 12 and under 14 4s. 6d. 14 and under 16 5s. 6d. 16 and under 18 9s. 18 and under 21 13s. 6d. 21 and upwards ISs. 6d. A. 7. One male, above twenty one years of age, earning 17s. eleven hours and three quarters per day. A. 8. None. FEMALES. 1 FEMALES. 4 S. 6d,, in a regular week of A. 9. Same. A. 10. Six in summer, close at eight; seven In winter, close at eight; because, in winter, we think it a pity to call them from their warm, comfortable beds so soon. A. 12. Less, but not made up by the other days; averages about two hours less winter and summer; no lighting up in winter on Saturdays. A. 13. Breakfast, half past eight, half an hour allowed ; dinner, half past twelve, half an hour in winter, one hour in summer; drinking, half past four, half an hour. A. 14. Stops at breakfast and dinner, not always at drinking; but not more than three boys are employed at those times, and those not fully, and the work quite easy; serving a moving feeder. A. 15. Seldom have accidents; if stopped more than an hour, made up, but not more than half an hour per day; if stopped half a day or more, generally deducted at the week’s end. We think it right to have a week’s work for a week’s wages. A. 16. Have had but two accidents; paid the doctor’s bill; parents were well off, and appeared quite satisfied. In cases of sickness, we relieve those who are really in need; most of our workpeople are in good circumstances, and not often sick. A. 17. Three at Christmas; three at Holy Thursday; half a day in March; half a day in October; which, with the other occasional half days by accidents in the moving power, make about ten days in the year; of course not paid for. A. 18. Holidays as above; no one expects paying for holidays, excepting; persons in confidential situations. A. 19. No fining; in cases of a person coming too late repeatedly, tell him' it wilhnotfbe allowed. If a quarter of a day too late, or more; deduct accordingly, but.no {iked* fine;. A. 20. Do not; never did* A. 21. A. 21. Have not; are of opinion there would be great difficulty in getting a sufficient number of. hands, if all mills had to have two sets,; have a difficulty in getting one set at Yorkshire, present; do not think the children would attend so well to work if only partially employed; ~ being off part of the day unsettles.their minds, and disinclines them to work the other pavt. J. Cuttell.8? Co, IF found not to answer, machinery would be adapted to supersede them, which could easily " be done.; this would be very injurious to many families, and cause a great deal of distress. The children we employ are quite healthy, dare compare them with the same number that can be found in any situation. A. 22. No. A. 23. These returns show that only six are employed under that age; are employed in piecing cardings; it is not stress work; only requires attention. A. 24. See Answer to Question 17 A. 25. Cannot say exactly; we avoid both under and over hours as much as possible, not considering either beneficial to employer or employed. See Questions 7 and 17. A. 26. None. A. 27. We think parliament might legislate, without much risk, for twelve hours, or even eleven, making Saturday same as the rest, except in winter; but less than that would, in our opinion, be. injurious to all parties. The plan for two sets of children we much disapprove; the children would not be so efficient as if wholly employed; the parents would be deprived of one third, or one half, of their wages, and it would inevitably throw a great burden on the parishes. Parliament should be very cautious in legislating on this subject, lest, in their endeavour to remove some acknowledged evils, they should be the cause of others of far greater magnitude. J. Cuttell & Brothers.