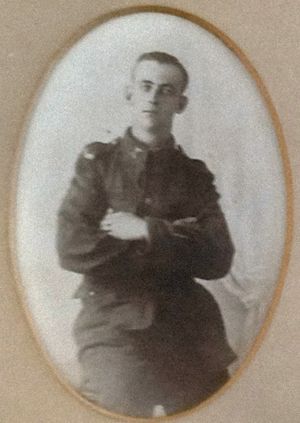 The Sykes originally came from down the Holme Valley. Willliam Isaac Sykes was born in the small community of Wooldale in about 1855 and baptised in the Weslyan Chapel in Holmfirth. In 1891 he married Ada Ann Eastwood at her parish church in Netherthong. Ronald Sykes was born on 27 June 1896 and christened at the same church in August 1897 when he was just over a year old, even though they were living in Lindley when he was born. One imagines it was quite a family affair with Ann's parents in attendance.

It was probably work that brought the couple and their first two children, Doris, born 1893, and Mary, 1894, to Lindley. By 1901 they seemed settled — they had two more children, Ronald and Marjorie, who had been born in 1899, and another boy, Charles, would follow in 1901 — and were living at 36 Union Street. William had what would have been a good job at the time: he was bookkeeper in a woollen manufacturer's.

This makes William one of the few "white-collar" workers living in the area, though interestingly his next-door neighbour is a clerk in a mill. Most of the others nearby seem to work in cloth production in more commonly found trades as weavers or winders for example, though one young man is an insurance agent.

By 1911 the family were at no. 32 Union Street but this may be the result of re-numbering. However, people did move house as circumstances changed — more members at work, for example, or a better house becoming available. This was certainly a good house by local standards: five rooms may have given them enough bedrooms for their needs.

The three oldest children were certainly at work by then: Doris was a milliner and Mary a dressmaker. Ronald was working as an errand boy in 1911, a job for boys just out of school: he was 14. On his army forms he said he was a tailor, working for Irving Kaye, in Spring St, serving an apprenticeship. This was a family of skilled and white-collar workers. 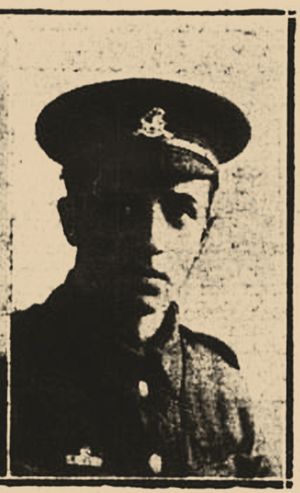 Ronald joined the Territorial, 5th Battalion of the West Riding Regiment, the Duke of Wellington's, in March 1914 well before the threat of war was anywhere in the popular consciousness. He must have had a seventeen-year-old's interest in soldiering and may never have expected to see action. He was also a member of the Young Men's Bible Class at St. Stephen's church.

At his medical, which was conducted at Huddersfield on 17 March, he was described as 5' 6" tall, with a chest measurement of 34 inches. His physical development was said to be good, his vision, fair.

Whatever his reasons for enlisting after war broke out, he found himself, on 4 August 1914 after the Territorials were mobilized, serving with the 1/5th Battalion in coastal defence at Marske, no far from Redcar. Shortly afterwards he was transferred to the 2/5th Battalion, which consisted mainly of men who had not volunteered for foreign service. He would have been stationed at the large new camp at Clipstone in Nottinghamshire.

While in the 2/5th Battalion, on 26 April 1915, he was promoted Lance Corporal. In August 1915 he volunteered for foreign service and on 14th was transferred back to the 1/5th battalion which had been in France since April. He arrived with at new unit on 19 August 1915 where he soon after asked to revert to the rank of private. The battalion soon became part of the 49th (West Riding) Division in the Estaires-Merville area of northern France.

Ronald was killed by a sniper, while manning a machine gun, on 9 December 1915, less than four months after arriving in France and just as the Battalion was about to be relieved and leave the front line for a long period of rest. He had one year and 272 days of military service.

Ronald was initially buried in the Battalion's small cemetery but now lies north of Ypres after his body was re-buried later in the Artillery Wood Cemetery, established in 1917.

His medals and scroll that were his family's due were dispatched between 1919 and 1921.

Ronald is remembered in St. Stephen's.

His parents received a letter from Lieutenant E Bond who wrote, 'I am extremely sorry to have to perform the painful duty of writing to inform you of the death of your son Ronald at the hands of a sniper whilst on duty with his machine gun in the front line trench. He was a jolly good fellow and a splendid willing soldier. All of us in the Battalion are very much concerned at his loss.It seems to us specially hard that he should go just as we are finishing our last spell in the trenches for some time as we were expecting shortly to have a long rest. Doubtless you will be comforted in the knowledge that he died nobly the death of a soldier and a Briton. He did his duty to the last and I am sure he will receive his reward. He is buried in our little cemetery in a pleasant spot within sound of the guns and above his grave has been placed a neat wooden cross.'

5th Battalion, Duke of Wellington's Regiment | Huddersfield and District Roll of Honour | Lindley Roll of Honour | People | Sykes (surname)
This page was last modified on 17 May 2020, at 11:22.