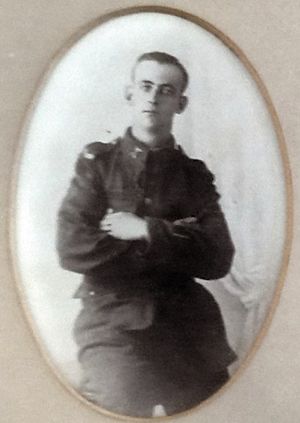 Robert Firth Haigh was born on 6 December 1891 and was baptised in St. Stephen's church on 3 April 1892 and was the forth child of Edward and Helen Haigh (née Brearly) who had been married since 1883. Helen was from Raistrick but Edward and the couple's six children (one would die in young) were all born in Lindley.

In 1891, before Robert was born, the family lived in Daisy Lea Lane and Edward worked as a stonemason. But this is not a large house in the bottom half of the lane such as that occupied by the Hanson family twenty years later. The Haighs lived in the small houses further up the lane opposite the recreation ground and long since demolished, presumably because of their poor state.

Ten years later and the family had moved to 39 George Street opposite the open farmland that would become the site of the junior school some six decades later. Robert and Elsie attended the Church School at the end of George Street on Holly Bank Road. The two grown sons were at work &mhdash; Charles at 17 a french polisher and Harry, age 14, a "vest presser". Sarah was only a year old.

But in less than three years, tragedy struck and Edward died — stonemason was an unhealthy occupation — leaving Helen a widow with two children of school age to raise.

A decade later they still lived at the George Street address and all children were old enough were in work: it seems like Charlie had secured two of them all jobs at the wholesale clothing company where he worked. Charlie had risen to being a clerk and felt able to complete and sign the census form.[1] Harry was a fitter, Elsie a "Jacket Finisher". For his part, Robert at 19 was "Peg Marking" in a brush works, in fact C. Buckley and Co., at Longroyd Bridge.

With all in work the family probably had enough of an income. However, with only three rooms the house must have seemed very cramped and had one room fewer than many in the village.

At some point Helen was to re-marry, becoming Mrs. Schofield and moving to Lockwood, and this may have been just before the outbreak of war. Robert became a member of the St. Stephen's Young Men's Bible Class.

No surviving records can tell us when Robert joined up. It may have been in the first days of the war like so many Lindley men, in which case we would expect to find him in the West Riding Regiment, Duke of Wellington's, rather than the West Yorkshire Regiment. Robert's number, a regiment-based one, suggests he joined the regiment early, before either conscription or the Derby Scheme of late 1915.

The West Yorkshire Regiment served alongside the Riding Battalions in the 49th West Riding Division and went to France in April 1915.

In 1918 at the time of the German Spring Offensive, the Division was in France not far south of the Belgium town of Ypres and north of Armentiers, and took part in the Battle of Lys (9-29 April 1918) to halt the German attack.

Robert was killed 25th April at the start of the short battle of Kemmelridge. He was 26 years old.

Robert was put on the Absent Voters List for 39 George Street, which might mean that his death was not confirmed until much later. It is probable that Helen Haigh received an allowance of 12/6d per week as a consequence of losing Robert.

Robert has no known grave but is remembered on the Tyne Cot memorial as well as in St. Stephen's.