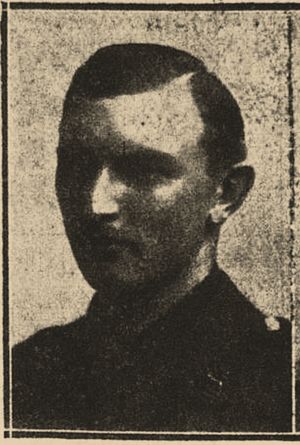 Robert Colin Stewart was another of the few officers on Lindley memorials. Robert was the son of John Stewart, a woollen manufacturer who lived in Thornleigh, Edgerton, and his wife Mary. John had been born in Kirkcudbrightshire on 1855 and his wife in Clackmannanshire ten years later.

John had been a commercial traveller in the early 1880s but by 1891 was already married to Mary and describing himself as a "woollen manufacturer". At this time the couple lived in Peebles and had a son, Ian aged 9 months, and could afford two live-in servants.

Ten years later John and Mary lived at Thornleigh, one of a pair of large semi-detached villas in Bryan Road, Edgerton. By this time they had two more children: Robert had been born in March 1892 and Mary three years later. It was a prestigious address and the family could afford a cook, a nurse and two housemaids to share their spacious house.

Typical of people of that social class, Robert’s parents sent him and his sister Mary away to school. Mary attended the Prior Fields School in Godalming, Surrey and was there at the time of the 1911 census,

Robert attended the Roscoe Preparatory School in Harrogate before going to Uppingham School in Rutland. While there he was a school prefect and represented Uppingham shooting at Bisley in 1908 and 1909. He would also have been a member of the school cadet force. He left the Uppingham in December 1910.

It has proved difficult to locate Robert in 1911. He was certainly not in Edgerton on the night of the census and young Mary was away at school. John and Mary had no children at home but shared the house with three servants.

At the outbreak of war Robert enlisted as a private soldier and after a few months, as a former member of a cadet force, was granted commission in the York and Lancaster Regiment. He was gazetted Captain just before sailing for France in August 1915.

Robert was killed on the first day of the Battle of the Somme, 1 July 1916, in the attack on Ovillers, north-east of Albert. His battalion suffered 635 killed and wounded that day, The British army suffered its worst ever day: almost 20,000 were killed and another 40,000 wounded or captured.

Robert is buried at the Blighty Valley Cemetery, Authuille Wood, along with over 1,000 others of whom 536 are unidentified. Most died on the 1 July 1916.

Robert is remembered on the memorial in St. Stephen's church and on a memorial in the Chapel at his old school and another in his former boarding house at Uppingham. He also appears on the Roll of Honour on the School web page.

Leslie Gordon Sykes, who like Robert, is remembered in St. Stephen's, was also an ex-pupil at Uppingham. James Tolson, one of the brothers after whom the museum at Ravensknowle Park was dedicated as a memorial, was also at Uppingham.

STEWART, ROBERT COLIN. Captain, 8th Battalion York and Lancaster Regiment. Born Peebles, Scotland, in March 1892. Son of John and Mary Stewart of 'Thornleigh', Huddersfield. Educated at Mr Roscoe's school, Harrogate, and Uppingham Public School. Shot at Bisley for his school in 1908 and 1909. Left Uppingham in December 1910. At the outbreak of the war he enlisted in the ranks and, a few months later, was granted a commission in the York and Lancaster Regiment. Was gazetted Captain before going to France in August, 1915. Killed in the attack on Ovillers on the first day of the Battle of the Somme, 1.7.1916. The casualties for the 8th Battalion York and Lancaster Regiment for 1.7.1916 were 635 men. He was 24 years of age. Buried BLIGHTY VALLEY CEMETERY. Grave location:- Plot 5, Row A, Grave 17.