Richard Durrans was a leather currier and brewer, who established the Lascelles Hall Brewery at Lepton.

He was born on 11 April 1829 at Lascelles Hall in Lepton, the son of stone mason James Durrans and his wife Sarah (née Hunt), and was baptised at St. John the Baptist, Kirkheaton, on 6 September 1829.

He worked as a leather currier in Oldham, where he joined a local Freemasons Lodge in December 1850, before becoming a brewer.

He married Sarah Cookson, daughter of William Cookson, on 6 June 1850 at Huddersfield Parish Church. The couple returned to Oldham, where were residing at 34 Manchester Street at the time of the 1851 Census.

By 1861, the couple were living on Foundary Street, Oldham, where Richard was now working as a wine and spirits agent. They moved back to Lepton during the 1860s where he established the Lascelles Hall Brewery at Common End.

In May 1870, Durrans was involved in a serious accident in Huddersfield. He was riding in a gig along Kirkgate when several sacks of grain fell from a passing wagon, toppling the gig and throwing him head first onto the road, where a wheel passed over his left arm and right leg. A passerby, John Marriott, intervened to stop the gig falling over onto Durrans. He was conveyed home to Lepton where he was attended by surgeon Mr. Dyson of Almondbury and it was reported that he was "seriously injured about the face and head as well as internally".[1] 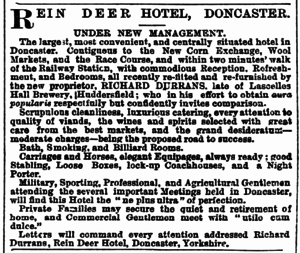 By April 1873, the couple had moved to Doncaster where he became the landlord of the Reindeer Hotel on Hall Gate. The brewery was subsequently placed up for auction in August 1873.

In March 1880, a petition was filed by Durrans at the Sheffield Bankruptcy Court, where he declared liabilities of £2,000.[2]

Richard Durrans died aged 58 in April 1888 at Doncaster and was buried at St. John the Baptist, Kirkheaton, on 11 April.