Richard Brotherton was not a Yorkshireman but was serving in the Huddersfield Borough Police Force when, having been a soldier for three years after 1905, he was mobilized on 5 August 1914. 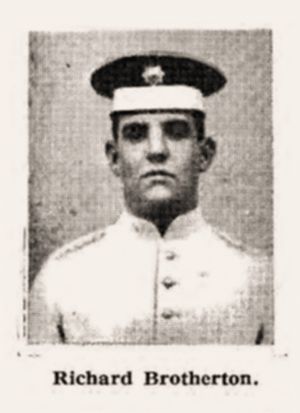 Born in Lincoln on 2 February 1881, Richard was the son of Richard Brotherton, an engine driver with the Great Northern Railway and his wife Betsy. There were three other children in the family, but Edward who was two years younger than Richard, died in 1893. Richard was educated at the St. Peter at Gowts church school in Lincoln.

By 1901 Richard was a Police Constable in Lincoln and lived with is parents in Arboretum Avenue, less than a mile from the castle. He left this job to join the army, enlisting on 18 January 1905 in the Coldstream Guards. He served for three years and on 24 May 1908 he married Fanny Brown, of Fairfield Street, Lincoln, in the city and joined the Huddersfield Borough Police force as a constable on 1st March 1909.

In the first two years of his service, Richard was disciplined three times: being absent from his beat for 15 minutes, failing to spot an open window and in December 1910 "quarrelsome conduct" involving another constable.

In the September of 1910 he had suffered a cut hand when a pane of glass had fallen on him while he was engaged in fighting a fire in Boy Yard, New Street. He was off work for 13 days. In fact, Richard was off sick five times in five years.

In 1911 Richard and Fanny were living in a four-room house, 2 King Street, Lindley and at that time had no children.

On the outbreak of war being in the Reserve, Richard was called back to the Army into the 1st Battalion, the Coldstream Guards which went to France on 13 August 1914, making Richard the first Lindley man to serve overseas.

In the First Battle of Ypres 19 October — 22 November 1914 — the 1st Battalion was virtually annihilated, being down to 150 men and the Lt Quartermaster by 1 November. Richard was one of these casualties reported missing on 29 October and later presumed top have died on that day. He was the third Lindley man to die in the war.

On 9 January 1915 Fanny gave birth to a son, George, who sadly died some three weeks later. Richard is remembered on the war memorial in St. Stephen's and on the Town Hall memorial to employees who died, and the memorial at the Huddersfield Police Headquarters.

His police record simply records in red ink that he rejoined the Coldstream Guards "on mobilization — August 1914. Reported as missing after an engagement in Flanders on 5th Dec 1914" and that he was presumed dead in September 1915 and that his widow received a pension of "12/6d per week".

It seems that Fanny may have returned to Lincoln and married again in 1920 when her pension would have stopped.

BROTHERTON, RICHARD. Guardsman. No 6015. Coldstream Guards. Born St. Peter's, Lincoln. Lived 2 King Street, Lindley. Was a Police Constable with the Huddersfield Borough Police force. Enlisted in August, 1914, and embarked for France with the British Expeditionary Force. Reported missing, presumed killed, at the 1st Battle of Ypres, 29.10.1914. Has no known grave. Commemorated on the MENIN GATE MEMORIAL TO THE MISSING.