The Rev. George Hough was the first incumbent of Holy Trinity, South Crosland.[1]

He was born around 1 July 1797 in London, the son of Samuel and Margaret Hough, and was baptised 6 August 1797 at St. Peter upon Cornhill, London. He had four known siblings:

Before coming to Huddersfield, he had recorded incumbencies at Holy Trinity Church, Hull[5] and at St. Peter, Earlsheaton, Dewsbury[6] 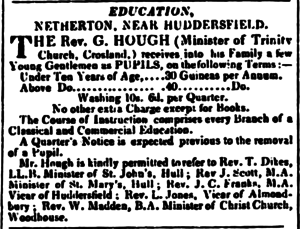 He arrived in South Crosland in the late 1820s and lived at Rose Cottage, Netherton, where he ran a small private boarding school. He continued to live at Rose Cottage until the Holy Trinity vicarage was erected in 1846.[7]

The boarding school was evidently a successful enterprise, as he advertised for a schoolmaster "to take charge of a school in the country, in the midst of a manufacturing population" in November 1939.[8]

He sold Rose Cottage in 1846 and moved into the newly built vicarage. The cost of the building had been partly met by the Ecclesiastical Commissioners.[11]

By the late 1840s, he was the President of the Netherton Mechanics' Institute and regularly chaired their meetings. He also attended meetings of other local mechanics' institutes and gave lectures at a variety of events.[12] In 1854, he was instrumental in forming the Netherton Female Educational Institute.

He was also involved with the Huddersfield branches of the British and Foreign Bible Society and the Society for the Promotion of Christianity Amongst the Jews.[13]

A renowned proponent of exercise, Rev. Hough was a prodigious walker and reportedly once took the morning service at South Crosland, then walked 10 miles to give an afternoon service at Penistone, before returning to South Crosland to give the evening service.[7]

It was reported that he become a teetotaller during the last 30 years of his life and he began giving talks a local Temperance Movement meetings. At the annual festival of the Meltham and Meltham Mills Temperance Society in December 1869, he peached two sermons in which he "set forth, in clear, forcible, and unmistakable language, the evils which resulted from the taking of intoxicating liquors ; and, although he would not say that the Bible actually prohibited their moderate use, yet, as it was perfectly clear that medical science had proved that persons could live quite as well and better by abstaining from the use of them altogether."[14]

His spinster sister Elizabeth lived with him, possibly initially to help raise his daughters. Following her death in 1870, he set up the Hough Memorial School in Netherton in her memory (now known as the South Crosland Junior School).

In April 1872, he accepted the role of President of the Netherton Floral and Horticultural Society.[15]

On 1 May 1878, a new east window showing the parable of the "Good Samaritan" was added to the church to celebrate the Rev. Hough's 80th birthday. The cost of £300 was covered by a public subscription and the window was designed by the renowned stained glass company Lavers, Barraud and Westlake of Bloomsbury, London.[16][17]

Hough had suffered from ill health for several years and it seems likely he performed his last service in February 1879, after which his curate, George Coulton, took over his duties.[18]

On the Monday before he died, a group of around 400 children took part in the annual Whitsuntide parade through Netherton. Amidst emotional scenes, they then gathered outside the vicarage and sang hymns:[20][21]

The usual procession was formed, and hymns were sung at various places in Netherton. The children partook of a good tea on their return, and after being re-marshalled, went to the vicarage. This was at the special request of the Rev. George Hough, who is gradually sinking, and who wished once more to hear the anniversary hymns. There was scarcely an eye but wet with the thought of parting with their dearly beloved pastor, who has laboured there for half a century. Mr. Coulton, in a touching address, said the Vicar "wished them all to try and join him in heaven, there to sing the praises of the Redeemer."

His will was proved on 16 July and was executed by his nephew, James Hough, and George Dyson. The probate record estimated his estate at under £12,000.

His niece, Mary Pattinson Hough, moved out of the vicarage in July 1879 and was presented with a "gold bracelet set with pearls" bearing the inscription "Presented to Miss Hough by the Sunday School teachers and friends of South Crosland Sunday Schools, July 5th. 1879". She was reportedly "overwhelmed with emotion".[22]

Buried at Holy Trinity, South Crosland | People | People connected to South Crosland and Netherton | Vicars, priests and ministers
This page was last modified on 14 April 2017, at 08:50.