Reginald Spurr was an artist and photographer known to have been active in Huddersfield and Bridlington.

He was born in Huddersfield on 26 July 1846, the son of attorney's clerk John Spurr of Lockwood Crescent and his wife Mary Ann, and was baptised on 30 September 1846 at Huddersfield Parish Church.

According to early advertisements from 1869, Spurr studied as an assistant to photographer John Vincent Hatch of Buxton Road and took over the business of artist, photographer and art dealer James Townsend Wigney on Ramsden Street (reportedly opposite the Theatre Royal). The following announcement appeared in the Huddersfield Chronicle of 15 May 1869:

REGINALD SPURR begs respectfully to inform his friends and the inhabitants of Huddersfield and neighbourhood that he has succeeded to the business of Mr. James T. Wigney, and on the 1st of June will RE-OPEN the PHOTOGRAPHIC STUDIO, Ramsden Street, where he trusts to receive a share of the liberal support bestowed upon his predecessor.

Copies of all Portraits taken by Mr. Wigney can be had, also LIFE-SIZE ENLARGEMENTS, on paper or canvas, painted in oils or water colours ; CABINET and MEDALLION PORTRAITS, and OUT-DOOR VIEWS of every description.

By 1870 he had joined the 6th West Yorkshire Rifle Volunteers.[3]

The 1871 Census records Reginald as a visitor at the residence of retired drysatler Christopher Smith on George Street, Huddersfield, where his occupation was given as "artist and photographer".

In May 1874, together with fellow photographer Henry Lord, he was an official photographer at the formal opening of the new Somerset Bridge by Lady Guendolen Ramsden, daughter of the Duke of Somerset.[4] One of his photographs was used as the basis of an etching in the Illustrated London News.

He married Emma Toye Dade[5], 17-year-old daughter of photographer Frederick W. Dade and his wife Matilda (née Toye), on 20 September 1877 at St. Mary, Scarborough. The family had four children, all of whom were born in Huddersfield:

By September 1883, he was named as a photographer with studios in both Huddersfield and Scarborough.[10] In November 1883 he announced that artist P.P. Skeolan had taken over the management of his Ramsden Street studio. By January 1884, he was regularly placing advertisements in the Hull press. 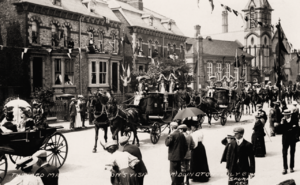 By 1891, the family had moved to Anlaby Road, Hull. By 1901, they were residing at 12 Windsor Crescent, Bridlington, where watercolour artist Fred Dade is listed as a visitor in the census of that year. Both Louis Francis Hugh and Florence Mabel assisted their father in the photographic business. It was at Bridlington that he established Spurr & Son who published a large number of photographs of the area under the title "Spurr's Series".

People | Photographers
This page was last modified on 8 April 2018 and has been edited by Dave Pattern.