Ravensknowle Park, sometimes referred to as Knowle Park, is a public park on Wakefield Road in Dalton. Located within the park is Ravensknowle Hall, now known as the Tolson Memorial Museum.

The park is home to a number of historic items. When the Cloth Hall was demolished in 1929/30, the Cloth Hall Street entrance and clock tower was dismantled and incorporated into the park's distinctive shelter. It also contained the first public tennis courts and bowling greens in Huddersfield.[1]

The Ravensknowle Estate had passed though a number of families, including Sir John Lister Kaye, before being sold to Thomas Wilson of Birkby Grange in 1827 and then John Beaumont of Dalton in 1850. [2] 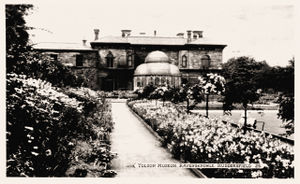 postcard of the Tolson Museum

In the summer of 1919, Tolson approached the Huddersfield Corporation with the desire to gift both the house and estate to the people of Huddersfield in order that they be turned into a museum and a park, and to act as a memorial to two of his nephews who were killed during the First World War — brothers Robert Huntriss Tolson (1884-1916)[3] and James Martin Tolson (1898-1918)[4]