Ralph Cuthbert, Ltd., were chemists situated at on Westgate, Huddersfield.

On the afternoon of 3 July 1883, Ralph Cuthbert was one of several shopkeepers on Westgate who assisted in the aftermath of the Lindley Tramcar Tragedy. Quickly grabbing an armful of "lint, bandages and other requisites for the dressing of wounds" he ran up Westgate to the crash site on Railway Street where his "timely supply of surgical appliances was very valuable."[3]

In December 1883, he transferred his business to 10-12 Westgate, situated on the right-hand side of the entrance to the Byram Arcade[4] and the Westgate shop was auctioned on 30 September 1884:[5] 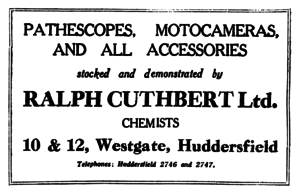 Whitaker's Red Book of Commerce or Who's Who in Business (1914) described the business as: " Chemists and druggists, manufacturers of mineral water, importers and dealers in chemical, photographic and scientific apparatus. Specialities: dispensing, drugs, surgical instruments, chemicals, photographic chemicals, scientific apparatus and mineral waters."