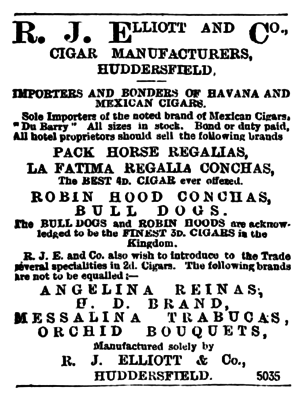 1899 newspaper advertisement
COMPANY STUB
This page is a bare-bones entry for a specific company or business. More detailed information may eventually be added. If you have any information relating to this company, please leave a comment or send an email!

The firm was established in 1860 by tobacconist Reynolds John Elliott (c.1838-1879)[1] of Mansfield, Nottinghamshire, who had moved to Lockwood by the time of the 1861 Census where he resided with his uncle and aunt, John and Ann Haigh, at Spring Place, Rashcliffe.