Power in the Land: The Ramsdens and their Huddersfield Estate, 1542-1920 was edited by Prof. Edward Royle, and published in 2020 by the University of Huddersfield Press in association with Huddersfield Local History Society. 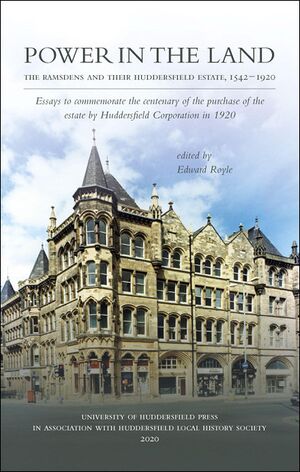 Huddersfield made history a hundred years ago this month when its Corporation agreed to buy the Ramsden estate, which included the whole of the town centre and over half of the land within the Borough boundary, for £1.3 million.

The Ramsden family’s association with Huddersfield began in 1542 when William Ramsden bought his wife’s home at Longley and ended in 1920. To commemorate the centenary of the purchase of the Ramsdens’ Huddersfield estate by the Corporation, Huddersfield Local History Society has brought together a series of original essays on the family’s role in shaping the town, resulting in an extensively illustrated new book, Power in the Land, published by the University of Huddersfield Press.

Edited by Edward Royle, Emeritus Professor of History at the University of York and a long-standing member of the Society, the seven essays by local historians not only explore the relationship between the Ramsden family with the town and its people, but also throw new light on the somewhat mysterious circumstances surrounding the purchase of the estate in 1920.