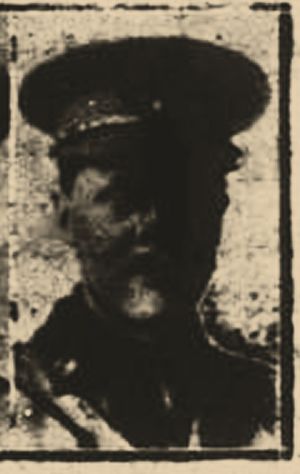 John Herbert Crowther, a surveyor of Fixby, married Hannah Elizabeth Townsend of Greetland, the daughter of a "manufacturer" in Elland parish church on 19 July 1882. Both fathers witnessed the wedding.

The couple were soon living at The Wood, Fixby where their first child Philip Townsend was born on 22 November 1883. Philip was baptised at their local church, St Philip's, Birchencliffe exactly a month later on 22 December. A daughter, Constance, was born two years later and baptised in the same church.

The Wood stands just above Grimescar Road overlooking the valley with the back of St. Philip's probably just visible through the trees.

By 1891 John was describing himself as a "Civil Engineer and Surveyor" and the couple were employing a governess and cook.

Ten years later Constance, aged sixteen, was still described as a "School Girl" unlike most of her contemporaries from more humble backgrounds who would have been at work for over two years by that age.

Philip is not recorded at The Wood in the census of 1901. By this trime at the age of seventeen he was a boarder at Aldenham, a small public school just 14 miles from the centre of London in Hertfordshire near Elstree that exists to this day. While at Aldenham, Philip twice represented the school at the Public Schools Gymnastics Competition held at Aldershot

Just over two years after the census, John Crowther died at the age of only 46. He was buried at St Philip's church.

After leaving school, Philip trained in an engineering works in Huddersfield between 1901 an 1905 before attending Leeds University where he graduated with a BSc in engineering in 1908. The 1911 census found Philip working in Yeovil, Somerset as a "Mechanical Engineer's Draughtsman", boarding with the family of a young fellow worker. Not long after, Philip went to Canada to work and became an engineer on the Canadian Northern and Intercolonial Railway only returning to England in 1914, arriving on the Cunard ship, the SS Transylvania which docked in Liverpool on 29 December. Interestingly, he is described on the passenger list as a "bricklayer", which may point to the kind of work he did in Canada.

By this time his mother and sister had moved to Rose Cottage in Woodhouse, Huddersfield. Soon after getting home he enrolled in the Leeds University Officer Training Corps.

The OTC training enabled him to receive a commission as a 2nd Lt in the King's Own Yorkshire Light Infantry (Miners Pioneers), with whom he served first in Egypt arriving on 22 December 1915, and then in France.

In November 1916 he was transferred to the Royal Engineers and was sent to Newark for further training. While in Newark he was said to be very popular, joining the Newark Dramatic Society and performing on stage. In March 1917 he was sent as a full lieutenant to the 211th "Leeds" Field Company, part of the 31st Division in France.

His commanding officer described how he was killed, near the village of Bailleul-sur-Bertholt, less than two months after arriving back at the front,. He was "setting out" a communication trench into No Man's Land when at 2am he was killed by shellfire. "He was always so cheery and good tempered under all conditions. It is men like him we cannot afford to lose."

A rood screen in St. Philip's church was erected in memory of Philip by his widowed mother and newly wed sister. Harriet soon moved into Constance's house in Earlesheaton, Dewsbury and died in 1939 and was buried alongside her husband.

CROWTHER, PHILIP TOWNSEND. Lieutenant. 211th Field Company, Royal Engineers. Formerly 12th Battalion King's Own Yorkshire Light Infantry. Born 'The Wood', Fixby, 22.11.1883. Son of the late John Herbert Crowther and Hannah Elizabeth Crowther of Rose Cottage, Woodhouse, Huddersfield. Educated at Alconham School and Leeds University where he graduated with a BSc. in engineering. Prior to the outbreak of the war was an engineer on the Canadian Northern and Intercolonial railways. He returned to England in 1914 and joined the Leeds University OTC. and was afterwards awarded a commission in the K.O.Y.L.I., with whom he served in Egypt and France. He afterwards transferred to the Royal Engineers. Killed in action at Bailleul-sur-Bertholt, 5.5.1917, aged 33 years. Buried ALBUERA CEMETERY. Grave location:- North, Row A, Grave 2.