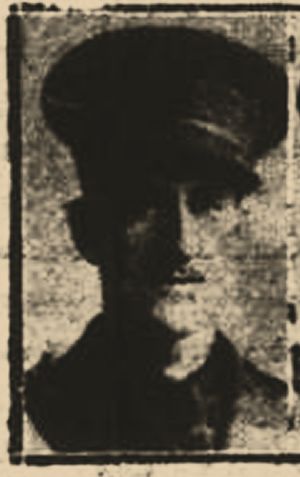 Lieutenant Oscar Walker was one of the few officers from the Lindley area who died in the War. The son of Arthur Edward Walker and Kate Mellor, who were married in Huddersfield in 1879, Oscar was born in 1890 when the family lived in Low Hills on Plover Road in the centre of Lindley.

Arthur Walker was partner in a family textile business that first owned a mill and land along Plover Road, now replaced by a housing development; George Walker owned the factory that became Wellington Mill but disposed of this in 1864.

The Walker family home was Low Hills a grand house also long gone, although the gateposts and ornamental pond can still be seen. After marrying, Arthur and Kate moved to another big house along Plover Road. The business continued to be successful: by 1881 the mill employed 300 workers and the couple had two live-in servants, one a nurse to look after 11-month-old Eveline, their only child.

A decade later there were four children and four servants and although Oscar was only a year old, none was described as a "nurse".

By 1901, Arthur was no longer describing himself as a woollen manufacturer but as a manager of a chemical works and as a worker rather than an employer; this may have been the enterprise found down in Birchencliffe. He was also a Borough JP. Oscar was by now eleven years old and as he is at home for the census this may imply he was, at least in part, educated locally — unusual for a boy of his background. No commentary later on his death records any school attended but the school years would be between censuses.

By 1911 the family were living at Ormesby House on Sunny Bank Road down in Edgerton and twenty-one year old Oscar was himself described as a "Textile Manufacturer". In fact he was employed at Messrs. Broadbent & Graves at Kirkheaton as a manager.

Oscar enlisted as private in the 2/5th Battalion of the local Territorial Force on 6 August 1915, just days after the declaration of war and given the low number of 2641. Initially the men were billeted at home and drill was undertaken in Greenhead Park — not far from the Walker family home — and the drill hall in the town centre (now part of the University).

Early in March 1915, the Battalion was moved to Derby then on to Doncaster and lined the route to the station to cheer-on the 1/5th as they left for France on the 14 April. Subsequently they were encamped in locations as varied as Lincolnshire, Northumberland and then Salisbury Plain to begin intensive training. From Bedford they set off for France via Southampton on 10 January 1917 arriving in Le Havre early on 12th.

Probably long before the Battalion left for France, Oscar was promoted through the ranks to Lieutenant: this may suggest he attended a private school that organised an Officer Training Corps or similar: men with such a background were quickly promoted officers. That he stayed in the battalion in which he enlisted as a private soldier might mean he was promoted very early on.

The battalion was stationed in the Somme area and saw action as early as 27 February and again in March. Then followed preparations for the oncoming attack on Bullecourt scheduled for the beginning of May.

On the early hours of 3 May the 2/5th followed tanks forward towards the village and the Hindenburg Line of fortifications. They were shelled and fired on by hidden machine guns. Oscar was leading his platoon forward, carrying a rifle, as officers were required to do, through the German wire when he was killed.

His body was never recovered but Oscar is remembered on the Arras memorial and at St. Stephen's, and also at the Baptist Church on Oakes Road at the top of Wellington Street, not far from the family home where Oscar had grown up. Also remembered at Oakes is a cousin of Oscar's, Reginald Walker, who died in August 1917.

WALKER, OSCAR. Lieutenant. 2/5th Battalion Duke of Wellington's Regiment. Born Lindley, Huddersfield, 15.5.1889. Son of Arthur Edward and Kate Walker, Ormesty House, Sunnybank Road, Edgerton, Huddersfield. Employed as a manufacturer by Messrs Broadbent and Graves of Kirkheaton. Enlisted as a Private on 6.8.1914 in the Duke of Wellington's Regiment. Killed in action at Bullecourt on 3.5.1917, aged 27 years. Has no known grave. Commemorated ARRAS MEMORIAL TO THE MISSING.