The Odd Fellows' Hall is a former meeting hall in Netherton, situated off Moor Lane.

It received a Grade II listing status in September 1978. 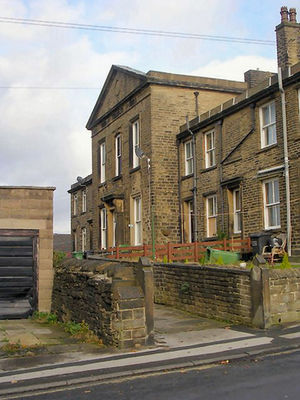 The building was financed by Lodge No. 499 of the Independent Order of Oddfellows, who regularly met at the Rose and Crown Inn. Land was purchased near to Blue Slates and the works were put out to tender in the summer of 1854.[1]

The architect was selected was James Pigott Pritchett (1789-1868), who had recently designed Huddersfield Railway Station and the Lion Arcade opposite the station.

By early August, it had been decided to also erect seven adjoining cottages.[2]

To celebrate the initial progress made on the building, a "rearing supper" was held at the Rose and Crown on the evening of Wednesday 22 November 1854. Around 50 people "partook of the substantial repast" after which James Wrigley "made some interesting and encouraging remarks."[3]

Building work was suspended in December 1854 when the foundations unexpectedly gave way. The Chronicle (23/Dec/1854) reported that, "the structure is much shaken, many of the windowsills are broken, and building, especially the middle portion of it, is likely to fall." The lodge meeting on the evening of 20 December, chaired by James Wrigley at the Rose and Crown Inn, resulted in the decision to suspend all work and to refer the matter back to Pritchett.[4]

By the summer of 1855, a new site had been selected on ground owned by the Godfrey Beaumont Trust Estate and a 999 year lease was signed on 28 July.[5]

The hall was formally opened with a concert of sacred music held on Wednesday 26 December 1855 and performed by the Netherton Choral Society, with principal soloists Miss Heaton, Mrs. L. Peace and Mr. Netherwood.[6]

A public meeting was held at the hall on the evening of Tuesday 19 March 1861 to discuss the planned Meltham Branch Line and Bentley Shaw's oppositions to the line. The attendees resolved that, "We, the inhabitants of Netherton and South Crosland, feeling ourselves aggrieved at the conduct of Mr. Bentley Shaw, in his determined and persevering opposition to a bill now pending in parliament to enable the Lancashire and Yorkshire Railway Company to make a branch line of railway from Lockwood via Netherton, to Meltham, resolve therefore that we will refrain from drinking any ale, beer, or porter brewed by the firm of Bentley and Shaw, till the train shall run on the said line through our village."[7]

On 11 March 1865, the firm of John Wrigley and Sons treated their employees on the occasion of the recent marriage of William Wrigley to Miss Dewhurst of Aspley. The women had tea in the local schoolrooms whilst the men given a "substantial English dinner" in the hall, provided by Joe Mellor of the Rose and Crown Inn.[8] Afterwards, the women joined the men for an evening of singing and toasts which lasted until nearly 10pm.[9] A similar event took place in November the same year when James Albert Wrigley married.[10]

On the evening of Wednesday 26 October 1881, a "grand entertainment" was held in the hall, staring Miss Adelaide Aldis[11] — billed as "the only lady ventriloquist in the world." The versatile Miss Aldis performed a variety of magic tricks before singing her own composition, "The Studley Royal Echo". The Chronicle reported that "her voice at one time being heard as if near the ceiling, and at others as though issuing from under the stage." The report ended by praising her "superior ventriloqial power."[12]

Local historian Philip Ahier recorded the following details in his 1938 publication, The History and Topography of South Crosland, Armitage Bridge and Netherton:

Up till 1860, the Wesleyan Reformers (later known as the United Methodist Free Church) used the premises for their Sunday evening services, but they found the expense of maintaining a cottage house at Bank End and the Hall too great, and ultimately decided to return to Wesleyan Methodism.

From 1858 to 1867, the premises were used by the Wesleyan Methodists for their Sunday evening services until the opening of their own Church.

In February, 1886, the South Crosland Local Government Board rented four rooms in the Hall at a rent of £12 per annum, one, in which they could hold their monthly meetings, and three others for offices, etc.

At some date which I have not yet ascertained, a fire occurred on the premises. Efforts were made to recover the Minute Books of the Local Government Board, but those from 1876 to 1882 were destroyed, as these were not in the possession of the former Urban District Council.

The building is now used for political meetings, public teas and dances, and was used on the evening of the Coronation of King George VI for entertaining the school children from the schools in the area.

Buildings | Listed buildings and monuments | Meeting halls
This page was last modified on 12 August 2018, at 08:49.