The Odd Fellows' Hall (or Oddfellows' Hall) in Meltham is situated on Holmfirth Road and was built in 1851, with an extension added in 1894.

The hall was built by the Meltham New Year's Lodge No. 230 of the Independent Order of Oddfellows (Manchester Unity).

The foundation stone of the hall was laid by William Leigh Brook (1809-1855) at ceremony held on the afternoon of Monday 21 April 1851.[1] The building was designed by local optician and chemist George Creaser with John Pogson of Meltham employed as the contractor.

By the start of 1852, meetings were being held in the hall and it soon became a venue for the Meltham Mechanics' Institution who held their third annual soiree there in January. The Chronicle reported around 300 attended the soiree and, although the building work had yet to be fully completed, the hall had been tastefully decorated.[2]

The hall was completed a few weeks later and was formally opened on Monday 12 April 1852, with William Leigh Brook presiding over the events. The Chronicle gave the following description:[3]

The building, the foundation stone of which was laid on Easter Monday, 1851, is a plain and substantial stone structure, designed by Mr. Creaser, and built by Messrs. Pogson at a cost of £1200. The lodge-room, which is admirably adapted for public purposes, is 69 feet by 36 feet, and is neatly fitted up. At the further end of the room there is a raised dais or platform, with a proscenium and curtains, having anti-rooms on either side. 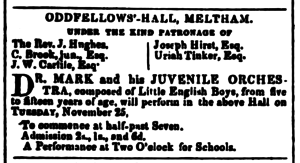 The original hall consisted of a three-storey building with the assembly room on the upper floor. The lower floors were rented as dwelling houses. In order to dampen the sounds from the upper floor, "cart loads of saw-dust"[4] had been packed into the cavity below the floor boards.

On Monday 18 January 1858, a fire broke out when soot inside the smoke pipe of the heating stove in the hall ignited and set a portion of the roof alight. Fortunately the fire was quickly extinguished and, as the Huddersfield Chronicle noted, the sawdust beneath the upper floor had not caught fire, otherwise "the building would in all probability have been destroyed."[4]

The 1861 Census record eight families residing in the Oddfellows' Building, with the head householders being:

The first caretaker of the hall was Edmund Hirst who died in March 1867 aged 87. Hirst had attended a Saturday evening concert in the hall and waited for the room to clear before turning off the gas lights. A group waiting outside heard groans from upstairs and found Hirst collapsed and dying. He was buried at St. Bartholomew on 12 March.[5]

In March 1894, the Chronicle reported on the planned alterations to the hall:[6]

This public building, which has for many years practically been the only available room for a large meeting, is about to undergo extensive alterations and enlargements, which will make it more convenient and much safe than it has hitherto been. There is now only one entrance and exit by a narrow winding staircase, which might have been specially designed for the slaughter of many of the audience in case of fire of panic arising when the hall is crowded. Happily this has not taken place, or Meltham would have had the unenviable of adding another holocaust the list of the country's disasters. Plans have been prepared by Messrs. J. Kirk and Sons, and the tenders let to Messrs. Moorhouse and Taylor, joiners ; Mr. J.W. Kaye, plumber ; Mr. S, Wilkinson, plasterer ; and Messrs. Preston and Sons, painters. The whole contract is estimated to cost about £1,000.

By mid-May 1894, the foundations for the new section of the building had been laid.[7] The foundation stones were provided by Messrs. Jas. Brierley and Co. of Warwick Quarries, Netherton, and were laid in an elaborate ceremony on 2 June by William Wrigley of Bent House, Edward H. Carlile, and C.F. Claverhouse Graham of Burton-on-Trent.[8]

The extension added a second stone staircase, a ground floor kitchen, rest-rooms and toilets. Local stone from Crosland Moor was used for the exterior walls. The formal opening ceremony took place in March 1895.[9]

In December 1946, a fire broke out in the hall. It was believed a lit cigarette was accidentally dropped and slipped between two floorboards, where it set fire to sawdust.[10]