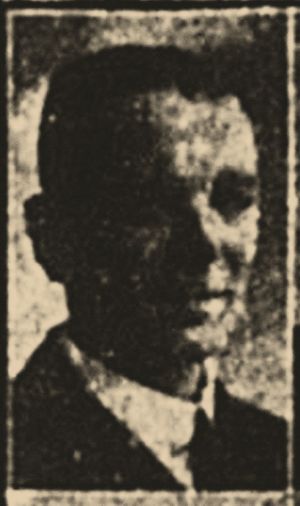 Norman Hirst has one the more unusual civil and military careers of those men memorialised in Lindley.

Born on 29 April 1879, the son of Joseph and Lucy Ann Hirst, Norman is also one of the oldest men from Lindley to die in the Great War. Joseph was a wool merchant and at the time of Norman's birth, the Hirsts, who already had four children, were living at 22 Luck Lane, Marsh.

By 1881 a sixth child, Harry, had been born and the family employed one domestic servant, Amelia Bailey, aged eighteen

By 1891 Joseph was successful enough to have moved to Hawthorns, a ten-roomed house on Thornhill Avenue across the New Hey Road form Luck Lane, however, sadly Lucy had died in the spring of 1887, so Joseph was raising the six children with the help of Susie Portens, aged 19, described as a "General Servant".

Hawthorns, owned by Joseph, would be the family home at least until well into the second decade of the 20th century.

Unlike most families in Lindley the children of working age — Edith aged 21, Florence 20, Frank 14 and Beatrice aged 13, are not credited with occupations: Joseph is prosperous enough for the boys to stay on at school and the girls to not need to seek employment, at an age when their contemporaries would be in the mill or card works.

Norman was a pupil at Longwood Grammar School and then Huddersfield College School. On leaving education he became an engineering apprentice at Messrs. Schofield & Taylor, Milnsbridge. By 1901 Frank is a salesman in the family woollen cloth business: they seem to have owned a warehouse in Brook Street in the town centre; Norman is by then a mechanical engineer and his younger brother Harry, an apprentice in woollen manufacturing.

The next decade was momentous for Norman; while Frank married and moved out to 1 Wellington Street, Norman took work as a ship's engineer with a Glasgow firm of shipowners, Glen & Co.

Norman sailed with firm as a Chief Engineer for twelve years until 23 August 1915 when his then ship, SS Trafalgar was captured and sunk by a German submarine, with no loss of life, some 50 mile south-west of Ireland. Norman reached England in October and enlisted in the Royal Garrison Artillery.

After serving two years in France with a trench mortar battery and being wounded twice, Norman was recommended for a commission and subsequently transferred to the Royal Naval Reserve where his engineering experience could be of maximum use, on 11 November 1917.

As a Sub-Lieutenant Norman was sent to be an engineering officer on the Royal Fleet Auxiliary ship Reliance, which serviced the Fleet in the eastern Mediterranean. On 9 October 1918 just a month before the War ended, Norman died of natural causes and was at the East Murdos Cemetery Lemnos.

HIRST, NORMAN. Engineer Sub-Lieutenant. Royal Naval Reserve. Royal Garrison Artillery. HMS Reliance. Born Huddersfield 29.4.1879. Son of Joseph and Lucy Ann Hirst, 'The Hawthornes', Thornhill Road, Marsh. Educated Longwood Grammar School and Huddersfield College School. He was apprenticed to Messrs Schofield and Taylor, engineers of Turnbridge, Huddersfield. He became a seagoing engineer with a firm of Glasgow shipowners in whose vessels he sailed for 12 years as Chief Engineer. On 23.8.1915 the ship on which he was serving, SS Trafalgar, was torpedoed and sunk by the Germans. On reaching England he enlisted in October, 1915, in the Royal Garrison Artillery, serving for two years in France with a Trench Mortar Battery and was twice wounded. On being recommended for a commission he was transferred to the Royal Naval Reserve on 11.7.1917. He died on board RFA Reliance, 9.10.1918, aged 39, at Mudros in the Aegean Sea. Buried EAST MUDROS CEMETERY, LEMNOS. Grave location:- Plot 3, Row I, Grave 250.